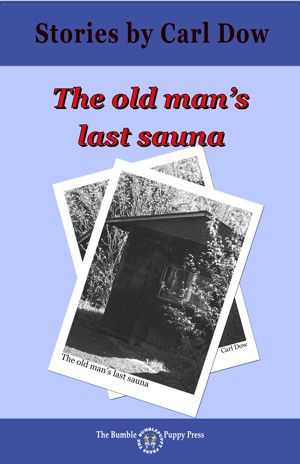 By Carl Dow
Born of the turmoil, violence and struggle for justice and understanding that marked so much of the 20th, The Old Man’s Last Sauna introduces a powerful voice for the 21st century. Carl Dow offers stories that will move, amuse and even shock with their subtle explorations of the human spirit. More
The Old Man's Last Sauna, by Carl Dow

"Life is scary, frustrating and sometimes funny. All of these themes are explored in Carl Dow’s collection of short stories, told with the pristine elegance that we haven’t seen since the likes of Stephen Leacock or even Pierre Berton." Award-winning writer Emily-Jane Hills Orford

From odes to loves found and loves lost, to a clear-eyed look at what it takes to destroy a strong man; from the web of love between a mother and a son, to a father’s understanding of the difference between his child’s imagination and the lies that lurk in the minds of the boy’s grandparents . . .

Carl Dow offers stories that will move, amuse and even shock with their subtle explorations of the human spirit. The Old Man’s Last Sauna introduces a powerful voice for the 21st century, born of the turmoil, violence and struggle for justice and understanding that marked so much of the 20th.

• Surrender . . . as a Rosedale heiress’ liberation

Carl Dow is an experienced writer/editor. As a journalist with such publications as The Globe and Mail and the late Toronto Telegram and Montreal Star, he received a number of recognitions, including a nomination for a National Newspaper Award. While writing for national magazines, Alan Walker, then managing editor of The Canadian, said that Carl Dow was considered one of the top ten writers in the country.

Carl Dow has edited tabloid and broadsheet dailies and weeklies, and monthly magazines. He has written for television and radio and has been on camera and behind the microphone. As youth editor of The Montreal Star he was the first newspaper columnist in North America to praise The Beatles, while others were disparaging them. He also worked as associate editor for Harvest House, a privately owned academic publisher. Outside of journalism and publishing, his gainful employment has included labourer in farming and in new-housing construction, sub-contractor in new-housing floor and wall tile installation, cost accountant and truck driver. With all this, however, his all-time favourite employment was the eight years he spent as a part-time school bus driver while writing this collection of short stories and several novels (coming soon from The BumblePuppy Press).

He keeps his hand in journalism as editor and publisher of the news-magazines True North Perspective and True North Humanist Perspective.

He is the proud father of two sons, Geoffrey and Thomas, in order of appearance, both of whom are writers and editors in their own right.

Carl Dow lives in Ottawa. He does not have a cat..

Reviews of The Old Man's Last Sauna by Carl Dow

You have subscribed to alerts for Carl Dow.

You have been added to Carl Dow's favorite list.

You can also sign-up to receive email notifications whenever Carl Dow releases a new book.