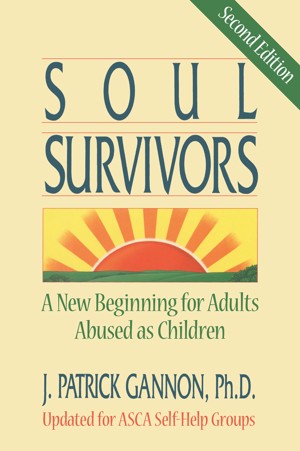 Soul Survivors: A New Beginning For Adults Abused As Children

J. Patrick Gannon, Ph.D. is a clinical and performance psychologist in private practice in San Francisco and San Rafael, California. He has worked with children and adults who have been abused over the last thirty five years. He lectures widely on a range of mental health issues. Dr. Gannon graduated with honors from Boston College with a B.A. in psychology and philosophy and received an M.A. and Ph.D. from the California School of Professional Psychology in Berkeley. In 1993, he became the Clinical Director of the Norma J. Morris Center for Healing From Child Abuse in San Francisco, CA where he was one of the founders of the ASCA Self-Help program. Soul Survivors became the theoretical basis for the ASCA program which drew on the 21 steps of recovery outlined in the book.

Dr. Gannon is married and lives in San Rafael, California with his wife Dr. Michelle Gannon, two sons and a dog and cat. In addition to his work with adult survivors, he has presented a secular, skill-based workshop called Marriage Prep 101 with his wife for the last fourteen years in San Francisco (MarriagePrep101.com) and is a specialist in performance anxiety and peak performance training with musicians, singers, athletes, actors, dancers, job applicants and public speakers. For more information about his performance work, visit www.PeakPerformance101.com. Email him at drpatrickgannon@gmail.com.”

Reviews of Soul Survivors: A New Beginning For Adults Abused As Children by J. Patrick Gannon

You have subscribed to alerts for J. Patrick Gannon.

You have been added to J. Patrick Gannon's favorite list.

You can also sign-up to receive email notifications whenever J. Patrick Gannon releases a new book.