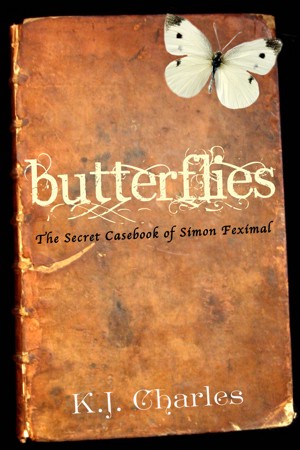 Rated 4.71/5 based on 7 reviews
Journalist Robert Caldwell doesn't expect to see ghost-hunter Simon Feximal again after one thrilling night in a haunted house. But their paths cross once more, this time investigating two corpses found shrouded in butterflies.

Now Robert wants the truth – on the deaths, on where the butterflies came from, and most of all, on the attraction that still burns between him and Simon. More
Journalist Robert Caldwell is still smarting from his first encounter with ghost-hunter Simon Feximal. Their night in a haunted house was thrilling, but the aftermath leaves Robert hurt, disappointed, and resolved not to see Simon again.

But just a few days later their paths cross once more, this time investigating a pair of mysterious deaths: two corpses shrouded in butterflies.

Now Robert wants the truth – on the deaths, on where the butterflies came from, and most of all, on the attraction that still burns between him and Simon.

KJ Charles writes romance, mostly m/m, mostly paranormal, fantastical, magical, historical, and wordy. She is the author of The Magpie Lord and a Rainbow Award-winner for A Case of Possession, Think of England and the Secret Casebook of Simon Feximal, all published by Samhain. She is an editor by trade, and lives in London.

I enjoyed this very much. Charles has a way with words - delicate horror. The other books they write are excellent.

This (free on smashwords) Caldwell and Feximal short story takes place right after [book:The Caldwell Ghost|18656381], and is great! I love Sherlock Holmes/Watson stories and this pair are the supernatural mystery version, and so very well done that it is just a joy to read.

The author also fits a lot of character, drama, gothic horror, everything!, into a short story, so it's well worth the read (I prefer novel length, however). Gets me right in the October/Halloween mood (I read this in October) with the supernatural element. I really, really want more, now! This author just can't write fast enough, as far as I am concerned. :)

Good one. Hope there will be more.

I like the sequel, Butterflies, better than its predecessor, The Caldwell Ghost. Robert and Simon gets more page time and we know more about their personalities in this book.

Robert is still naive in the ways of the world, but he's naturally curious and that suits his job as a journalist well. He is also very direct and assertive in communicating his feelings and dislikes. In comparison, Simon is the one who's more introvert. Simon's disposition comes from years of experience dealing with ghosts and people's motives in raising ghosts. He has seen things that made him grow older and mature into who he is. I really enjoy the couple's interactions, from letters to blow jobs, in this book.

The mystery plot is chilling with a creepy imagery of butterflies killing people. The description are vivid and I love it. Two people died with mysterious and copious amounts of butterflies around them and in their throats. Simon is called in to investigate and Robert meets him on in assignment from the newspaper. Their partnership on this case is clear and well portrayed.

Overall, this is a great story with a well developed plot and interesting characters. I would recommend reading The Caldwell Ghost to be more acquainted with the characters since Butterflies starts right after The Caldwell Ghost ends and it would satisfy a curiosity of how these two characters meet. However, it's not necessary to do so in order to enjoy the second book. Mystery fans should definitely give this story a try.

Great story! Sort of perfect what with Halloween coming up. Thanks for sharing

You have subscribed to alerts for KJ Charles.

You have been added to KJ Charles's favorite list.

You can also sign-up to receive email notifications whenever KJ Charles releases a new book.