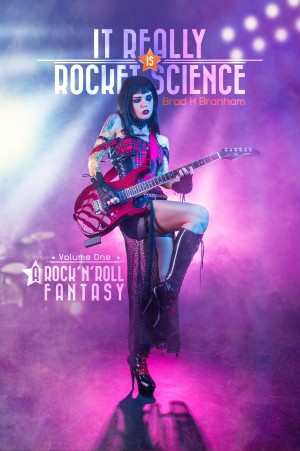 It Really IS Rocket Science, A Rock'N'Roll Fantasy

Rated 5.00/5 based on 1 reviews
Rocker-in-self-exile Blar Umlaut spots an enchanting goth princess in a snowstorm. The chain of events that follow lead to a revival of his career, a new band, romance, adventure, and dark hilarity with the trio of women he befriends.

This is the first volume of a series following the life, adventures, romances, and antics of the eccentric and quirky members of a rock band. More
Rocker-in-self-exile Blar Umlaut spots an enchanting goth princess in a snowstorm. The chain of events that follow lead to a revival of his career, a new band, romance, adventure, and dark hilarity with the trio of women he befriends. "The Lost Girls" need a bootstrap to break into the music business. Blar isn't certain whether he's helping because he's smitten or because it would be a crime to let their outstanding talent go unnoticed. Being merely human, it's a lot of both. It Really IS Rocket Science ... after all.

A small rock band called “The Lost Girls” and a rocker-in-exile join forces to form a new band called “It Really IS Rocket Science”. Join Blar, Tsika, Glycerin, Kpau, and a gang of other misfits as they try to make it to the top and figure each other out along the way. Adventure, comedy, drama, romance – kind of the way life really happens. Set in Portland, Oregon with travels to destinations all over the planet.

Set in Portland, Oregon initially and eventually leading to all parts of the globe; grounded in the modern music business; the story is about misfits making a musical life together and reflects that life is funny, tragic, wonderful, scary ... sometimes all in the same moment.

This is the first volume of a series following the life, adventures, romances, and antics of the eccentric and quirky members of a rock band.

Brad Branham has had a varied career in electrical engineering and software development on NASA projects, defense contracting, and scientific pursuits. He enjoys writing slice-of-life adventures. The settings may be rock'n'roll, fantasy, science-fiction, or other unusual locales but the people and their antics are what fundamentally make a story entertaining.

It may not really be Rocket Science, but it's still an excellent book packing some great characters and which strikes a good balance between packing some drama and maintaining a light, fun mood.

The greatest strength of this book is in its characters. The aspiring and/or returning rock stars that populate Branham's book are the kind that find their minor celebrity more odd than corrupting and maintain a fairly down to earth nature. My personal favourite would have to be Glycerin, a tall, timid beauty with showstopping talent. Those who have watched the anime K-On! might liken her to a more sophisticated and fully fleshed out version of Mio. She's joined by her two bandmates Tsika, a petite, Moscow born gothloli with a delightful tendency towards moodiness, and Kpau - who rounds out the three woman band in an energetic and extroverted way. The three of them make a great ensemble. They're joined by Blar, a living out of the limelight former rockstar whose very human flaws thankfully do not include a rockstar ego. He plays the three women quite nicely - I found the dialogue oddly reminiscent of Firefly, a series I adore - though he's not good at hiding his interest in Glycerin and especially Tsika. One of his former bandmates also makes an appearance but I won't spoil her.

Branham says in his foreward that he did some research into the music industry before reading this, and it pays off in a believable world. The band's success is underpinned by a nice combination of talent, pounding the pavement - or stage as the case may be - and connections with interesting people. The pacing is pretty good too, with the backstories of the Lost Girls being revealed to Blar - and by extension the audience - at a fairly natural rate. There's clearly more to come - both in main story and back stories - as the book is to be continued. Thankfully Branham chooses a decent cutoff point for where to end the book.

Some aspects of the story may not be to everyone's taste. Most notably, the Lost Girls themselves are a fairly broken bunch with quite a few issues, and I could see some audiences finding them grating even though I find them an enjoyable bunch. But on the whole I found the story a lot of fun and if you like what you've heard here, I would recommend giving it a shot.

You have subscribed to alerts for Brad Branham.

You have been added to Brad Branham's favorite list.

You can also sign-up to receive email notifications whenever Brad Branham releases a new book.