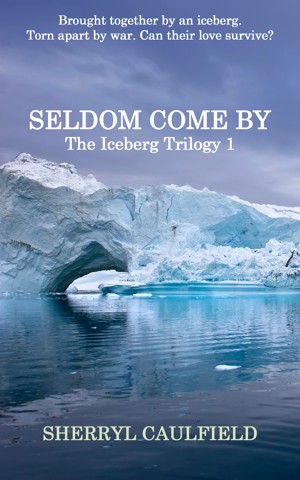 By Sherryl Caulfield
Rebecca Crowe’s fascination with icebergs leads her to save a shipwrecked survivor, Samuel Dalton. Love sparks in the crystal cave of an iceberg but is thwarted by an unreasonble father and the Great War that drags Samuel to the Western Front. As the war moves towards its final harrowing days they both discover tragedy and terror can strike anywhere, setting their love on an unforeseen path. More
If you crave epic, adventurous love stories. If Jamie and Claire, Alexander and Tatiana or Nathaniel and Elizabeth mean something to you. Then meet Samuel and Rebecca and the iceberg that started it all.

Two years after the sinking of the Titanic, fifteen year-old Rebeca Crowe’s fascination with icebergs leads her to save a shipwreck survivor, Samuel Dalton, the nineteen-year old son of a Toronto medical family. In a summer like no other, Rebecca and her older sister, Rachel, are reborne in the presence of the spirited young man that is Samuel.

Love sparks in the crystal cave of an iceberg but is thwarted by an unreasonable father and the Great War that drags Samuel and his brother, Matthew, to the Western Front as medical officers. Knowing Rebecca is home safe in Newfoundland brings Samuel great comfort. But before the war is over they both discover tragedy and terror can strike anywhere. Only when Samuel and Rebecca can fully come to terms with such devastating loss and their impossible choices can their love soar. With an emotional intensity reminiscent of The Bronze Horseman, Seldom Come By, named after an actual place in Newfoundland, is an unforgettable journey across waves and time and the full spectrum of human emotions.

Australian-born Sherryl Caulfield is a marketer, writer and traveller. After twenty years working for some of the world’s leading technology brands and a stint with Outward Bound, she longed to write about the human experience and the redemptive qualities of nature.

In 2006, haunted by an encounter with a woman she met in Canada, Sherryl started what has now become known as The Iceberg Trilogy. From her home in the Marlborough Sounds, New Zealand, she distilled the lives of three generations of women – Rebecca, Evangelene and Lindsay – over the course of a century.

In the telling of their stories she crafted a series rich in landscapes – of sea, land and the human soul. Adventures have been central to her life: climbing Mt Kinabalu in Sabah, trekking to the base camp of Makalu in the Himalayas; and paddling the classic Bowron Lakes canoe circuit in British Columbia, a location that features in two of her novels.

Her formative years were spent on a farm in Cedar Pocket, in South-East Queensland, once home to large stands of one of Australia’s few native deciduous trees, the Red Cedar. Now residing in Brisbane, Sherryl is a partner in marketing agency, Action Communications, and winner of a Gold Serif from The Australian Society of Business Communicators.

You have subscribed to alerts for Sherryl Caulfield.

You have been added to Sherryl Caulfield's favorite list.

You can also sign-up to receive email notifications whenever Sherryl Caulfield releases a new book.