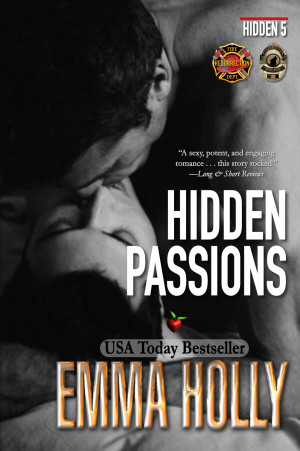 Tony might be a wolf, but he wakes longings Chris finds difficult to deny. When a threat to the city throws these heroes together, not giving in seems impossible. Following their hearts, however, means risking everything . . .

Emma Holly is the award winning, USA Today bestselling author of more than forty romantic books featuring billionaires, genies, faeries and just plain extraordinary folks. She loves the hot stuff, both to read and to write!

About the Series: Hidden

Publisher: Self
Publish Date: Out now
How I got this book: ARC from the author

Sexy fireman Chris Savoy has been closeted all his life. He’s a weretiger in Resurrection, and no shifters are more macho than that city’s. Due to a terrible tragedy in his past, Chris resigned himself to hiding what he is—a resolve that’s threatened the night he lays eyes on cute gay cop Tony Lupone.

Tony might be a wolf, but he wakes longings Chris finds difficult to deny. When a threat to the city throws these heroes together, not giving in seems impossible. Following their hearts, however, means risking everything . . .
This blurb came from the author’s website.

Holly’s latest installment in her Hidden series takes place around the events of Hidden Dragons so you really should read Hidden Dragons first. In the first Hidden Story, Hidden Talents, Tony was introduced. He had recently come out to his pack and his pack-mates were trying to adjust to their new normal. It was great to see that as events in the Hidden world progressed Tony was pretty much fully accepted by his pack-mates, and they did their best to keep him safe, sometimes to the extent of making him feel left out of the loop. He was also feeling left behind in other areas because one by one they were mating but he did not have any prospects for even a steady date.

Chris was introduced in Hidden Crimes as the beta of the weretiger pack. As a firefighter he almost died during a rescue attempt and it took the combined power of his alpha and a dominate member of the wolf pack, Adam, to ensure he healed properly. Usually the two species didn’t spend much time together but since the weretiger alpha mated Adam, the two will be in close proximity. This would be challenging enough but Holly included a few other elements; Chris is in the closet, there are some vocal homophobes in his crew, and Chris is seriously attracted to Tony.

This particular installment pulled out the angst. Chris was not only dealing with his overwhelming attraction to Tony but PTSD from his most recent near death episode and a tragedy from his adolescence. In addition he was facing rumblings of discontent within the crew. As Beta, Chris’ job was to enforce as well as support his alpha but he was reluctant to physically smack down the dissenters for fear of taking it too far or overreacting due to his orientation. So he kept trying to fix it verbally while having a few hidden extremely hot encounters with Tony. As intense and caring as those encounters were, they also really shattered Tony’s heart because Chris kept walking away and would not acknowledge their connection. Each time that happened I could see Tony crumble and wonder why Chris refused to at least keep in contact after their mind-blowing sexytimes. Chris was also torn between his attraction to Tony, knowing he wasn’t treating Tony as he should, and the worsening atmosphere within his crew.

I loved how Holly brought it all together and forced Chris and Tony to see what was important. Several key characters from Hidden Dragons were also crucial to the conclusion of this particular story. I can’t go into detail about the conclusion due to major spoilers for both stories but decisions were made, choices announced, happiness fought for, and the possibilities for an eventful life created.

In Hidden Passions Holly has again expanded her world and created memorable characters. I enjoyed how the events in this story took place around Hidden Dragons because it very effectively made the world seem three-dimensional with events happening while life continued instead of events occurring in a vacuum. Watching Chris and Tony struggle with their relationship and acceptance from those around them was really heart-wrenching. I also loved how patient and caring Chris was during their sexytimes. The first time **fans self** was amazing and sweet at the same time. I am eagerly anticipating Holly’s next installment.

I give Hidden Passions an A-

Emma Holly never disappoint. I confess, I'm a longtime fan. And once again she drags us in a parallel world go magic.

This book is a slight departure from her other books in Hidden collection, it's a m/m romance only. She has almost written any other permutation of a love story. It is a hot passionate love story between a policeman and a fireman, between a wolf and a tiger. The storyline is in parallel with the previous book Hidden Dragon.

I simply love it! I'm re-reading it for 3rd time since a got my copy. I will recommended most definitely to my friends. An I hope you enjoy it as much as I did

It's no secret that I am a fan of Emma Holly, I have professed my love for her books on this blog a few times, but seriously they are just that damn good! The world that she has created in the Hidden series has just enough mundane things in it to feel real but the otherworldly creatures are what give it it's originality.

To say that I have been waiting patiently for Tony's book would be a flat out lie! I have been hoping for the hottie cop to find his forever guy since I finished book one. I really thought after some things that happened in Hidden Crimes that we might be getting a Tony/Liam hook-up but that is not the way things played out. But that's OK, because that means that I still have Liam's book to look forward to.

Were-tiger Chris was grrrreat! He was so completely sexy and the first time that he and Tony hooked up I loved the way that he took care of Tony. I hated that he felt so afraid to come out and be his true self.

I liked that Tony was laid back and didn't seem to let it bother him when people made comments, but when push came to shove he stepped up in a big way. Every book that I have read in this series that Tony has been in, he has always seemed to be the heart of the team.

I think it's important when you have a series like this that you have a strong cast of secondary characters, some old and some new. Ms. Holly has a special gift of being able to blend these characters into the story line adding complexity in the simplest of ways. With each book that passes the characters become more real because of the addition of family and children, so we the reader feel like we are part of their lives and are watching them grow. For me, I know it adds to my anticipation for the next book and keeps me invested in the series as a whole.

I highly recommend this book if you are a lover of great stories that have some HEAT!

(reviewed 4 days after purchase)
nedma1 reviewed on Nov. 7, 2013
(no rating)
This story runs concurrently with the events that take place in Hidden Dragons (Hidden #5) and is best if you read Hidden Dragons first.
Tony is at a good place in his life. He may be the least dominant male wolf in the Resurrection Police Department but he is a good cop and he has friends and family who have supported his decision to come out as gay. When he meets sexy weretiger fireman Chris Savoy he is smitten. The problem is Chris is tightly in the closet and surrounded by homophobes. Chris is torn between his feelings for Tony and the job that has given him a reason to live. When they are together the chemistry is smoking hot. Tony wasn’t the only one who was hurt by Chris’s indecision. I so wanted to smack him upside his sexy furry head. This is a m/m romance with Ms. Holly’s trademark scorching sex scenes so if that isn’t your thing you might want to skip this book but if it is you aren’t going to find much better than this.

You have subscribed to alerts for Emma Holly.

You have been added to Emma Holly's favorite list.

You can also sign-up to receive email notifications whenever Emma Holly releases a new book.