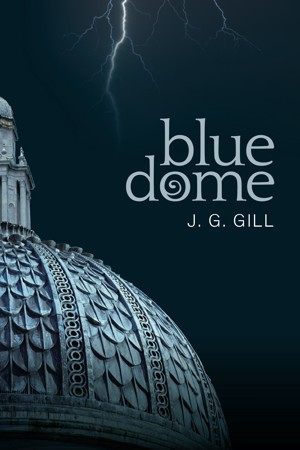 It's an ordinary Thursday afternoon when sixteen-year old Clare de Milo arrives home from school to find that intruders have broken into her house and everything's been destroyed. Her father and step-mother are missing and, scrawled in blood on a bedroom mirror, is the word 'RUN'. Clare and her brother Bede have suddenly become fugitives, uncertain who they can trust as they try to escape the relentless pursuit of the mysterious and dangerous Demarge. But why is Clare, a mere teenage girl, so important to a man as powerful as Demarge and why is he determined to use her to gain entrance into a secret sanctuary known as the Slipworld? These are the questions that Clare, her brother, and their friends must attempt to answer as they discover that the world they know is not all it seems...

J.G.Gill lives in London where she writes novels for young adults. She is the author of the 'Blue Dome' trilogy. You can visit her website at: www.jggill.com/

Firstly id like to thank J.G. Gill for giving me this book in exchange for a honest review

This story started off really good but right about the time she is attacked by giant eels the story takes a turn to strangeville and not in a good way. Considering it took me a lot longer to read then it normally does is a testament to how I just couldn't get into the book.

Clare is a 16 year girl and one afternoon she comes home after school to find her house trashed the word RUN written in what looks to be blood on a mirror. Soon Clare and her older brother Bede find out that not only has Bede been accused of killing their father but that their stepmother Arlene has been lying to them from the first moment she met their father. Oh and they also discover that they aren't entirely human and that Clare may just be the ticket for an ancient being to destroy a world no body knew existed.

The story is told from several points of view while Clare and Bede first hide from the police then try to find each other after being separated all while trying to escape and avoid a man named Demarge and people who work for him, as well as finding help from new friends and realizing old ones aren't so loyal.

Great read.
Not normally my kind of book, but well written and very enjoyable to read.

(reviewed the day of purchase)
nickymohring2 reviewed on March 2, 2014

Amazing read. Exciting plot keeps you riveted till the end.

Really loved this book, very hard to put down!

You have subscribed to alerts for J.G. Gill.

You have been added to J.G. Gill's favorite list.

You can also sign-up to receive email notifications whenever J.G. Gill releases a new book.