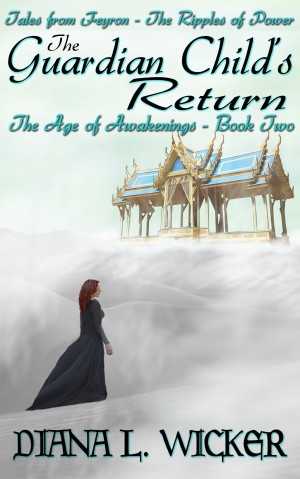 The Guardian Child's Return: The Age of Awakenings Book 2

By Diana L. Wicker
Rated 5.00/5 based on 1 reviews
The Guardian, Lord Grypos, calls for a journey, offering vision of red desert sands, a land of grey beyond, and a cavern of twilight behind an obsidian wall. “Arwyn and Shyamal are to go there for me to seek out that which was once mine.” A seemingly simple task becomes an adventure with life threatening consequences as they travel far from home to a realm that few even knew could be reached. More
One of the Tales from Feyron - The Ripples of Power stories

The Guardians have awakened after the Time of Sleep and returned to renew the magic with the clans of Faie. At the request of the Guardian, Lord Grypos, Keeper of Knowledge, the Master Scholar travels through the Outer Gateway with craftsmen and apprentices to coordinate the repairs of the once great oasis that houses the ancient archives of knowledge known as the Island in the Sands.

As the summer wanes and the oasis begins to return to its former glory, the Guardian calls the Master Scholar to the meditation room in the wee hours of the night to discuss a journey. In the fire an image flickers of the red desert sands speeding past, a land of grey beyond the desert, and a cavern of twilight behind an obsidian wall. “Arwyn and Shyamal are to go there for me to seek out that which was once mine.”

What starts as a seemingly simple journey becomes an adventure with life threatening consequences as the two are unexpectedly joined by their friends on a journey far from home beyond the Realms of Light in a realm that few within the clans of Faie knew could even be reached.

Diana is an indie author living in the balmy climate of the US south with her family and fur babies (2 rescue dogs). She enjoys reading, sewing, cosplay, being a studio mom for dance school, and RPG games. (She grew up with the old school paper/pencil style of gaming, but has transitioned happily to the highly interactive world of video games.) And, as if she had more time to spare, she has invested in Asian ball jointed dolls to customize into characters from Feyron.

The idea for Feyron started with a map, a place for her daughter to tell stories and live out storytelling role-playing adventures with her friends. The lore grew around the map, for every world needs lore if you are going to “live” there. The idea for a series, Tales from Feyron, grew out of the lore, for if you’re going to invent a world, you may as well play there too. The stories are continuing to grow through the various historical ages of Feyron and have just started to ripple outwards to the Worlds Beyond touched by magic. Legacy of Mist and Shadow is the first tale to venture to one of those worlds and has been awarded the BRAG Medallion by Indie BRAG. http://www.bragmedallion.com/about

Also in Series: The Age of Awakenings

Also in Series: Tales from Feyron - The Ripples of Power

A great sequel to "The Dreamweaver's Journey" and a fantastic read!

You have subscribed to alerts for Diana L. Wicker.

You have been added to Diana L. Wicker's favorite list.

You can also sign-up to receive email notifications whenever Diana L. Wicker releases a new book.