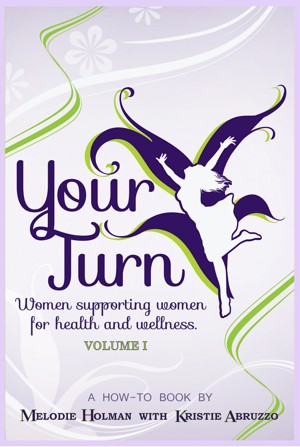 Your Turn Women Supporting Women for Health and Wellness Volume I

By Melodie Holman with Kristie Abruzzo
Since the inception of Your Turn, two women have supported change in over seven hundred women in three counties and two states. My dream is to CHANGE THE WORLD. We do not give any attention to gossip, negative self-talk, or snickering at another woman’s dreams. We support, encourage and inspire others to be their best self in health and wellness. Please join us! More
This book is about supporting another woman in your life for health and wellness.
A while back, on an eighteen mile run, something in me changed and a few months later I found myself asking the question to God or the Universe, “What is my purpose here? I lost ninety-eight lbs and ran a marathon for some reason, what is it??? What do you want me to do?”
It hit me smack in the face as I sitting in my recliner making up a Power Point presentation for a Let’s Lose It class at the YMCA. I told myself this:
“I want other women find the same feeling that I had on that run. I want women who feel like they can’t change, can’t be fit, can’t lose weight, can’t be strong to know this is possible. I want “real life women” to know this is possible. I want women to feel what I felt; I want them to know what feeling strength and power is like; I want them to be selfish enough to take back their health knowing the benefits to their family, their community and the globe.
This is a great step forward, please join me.
Download: epub mobi (Kindle) pdf more Online Reader
rtf lrf pdb txt
Price: Free! USD
Add to Library
Create Widget
Tags: women fitness wellness health support
About Melodie Holman with Kristie Abruzzo

Melodie Holman is the co-founder of a small start-up not-for-profit organization named Your Turn.
In October of 2009, she stood on the scale at her doctor’s office and told herself she was fat. She is the mother of five children and over the last three and a half years lost one hundred pounds, ran a marathon, and started a woman’s movement. She also lost their home to a forced short sale during the Great Recession.
Mel’s journey started in the Upper Peninsula of Michigan until Kalamazoo called to her through the voice of her sister Michelle. Mel and her two children, Alex and Molly moved to Kalamazoo in 1999. There she met and married the love of her life, Jimmy Holman, and together they added three amazing boys to their family, Clarke, Pryor and Walter.
In addition to her passion for her family, Mel has a passion for the health and wellness of women. She throws herself into this passion everyday with the gusto and energy of a teenager.

You have subscribed to alerts for Melodie Holman with Kristie Abruzzo.

Would you like to favorite Melodie Holman with Kristie Abruzzo?

You have been added to Melodie Holman with Kristie Abruzzo's favorite list.

You can also sign-up to receive email notifications whenever Melodie Holman with Kristie Abruzzo releases a new book.