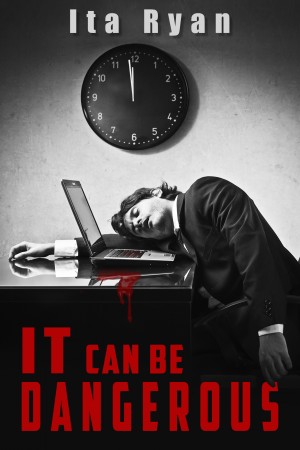 IT Can Be Dangerous

The police are bound to suspect her, since she has no alibi and was cutting code right outside his office when he was murdered.

There's only one thing to do before she's arrested - find the killer herself.

But the enigmatic Superintendent in charge of the case doesn't approve, and then she attracts the murderer's attention... More
***** Selected as one of the 'Ten to Taste 2014' by crime and thriller site Crime Fiction Lover. *****

Here are extracts from some reviews - you can see more on Goodreads.com and the usual review sites.

"I love mysteries and this debut from Ita Ryan was superb! She kept me guessing until the very end and I thoroughly enjoyed it! Cynthia is a fabulous amateur detective and I want more!!!"

"This book is a must read...The plot is well written and flowed. I loved the way Ita writes the characters. The office politics is believable."

"A well-crafted whodunit is deftly set up and unfolded for us in high-tech London cubicle-land, with looming deadlines, debugging, redundancies, outsourcing, a mysterious handsome stranger...and a bit of office backstabbing.
With a knife.
In the corner office."

"As for whodunit, the clues were all there, but I never suspected until the culprit was revealed at the climax. For me, that is the acid test of a good murder mystery..."

"I finished your book at 3am this morning. Very impressed."

"Some parts made me laugh out loud, the dialogue was natural and believable, and the pace was perfect - when I reached 75% on the kindle edition, I stayed awake until 1am to finish reading. IT Can Be Dangerous kept me interested, entertained and hoping for more Cynthia Hegarty mysteries! Recommended."

I've always loved reading mysteries. It was probably inevitable that my first book would be a whodunnit. 'IT Can Be Dangerous' opens with a murder in a conventional London City office and explores what the startled body-discoverer did next.
I've been a computer programmer for years, so a programming office was the natural environment to set the book in.
I was born in Dublin. I've lived in Ireland for most of my adult life except for a year in Sydney (the one in Australia) and two years working in the City in London.
I've had my writing broadcast on Irish national radio station RTE1. At work, I specialise in C++ real-time software development and, more recently, .NET.
I have a degree in Politics and Philosophy and a First Class Masters in Applied Computing for Technologists.
I've taught both creative writing and computer courses.
There's a bit of a theme here....
In 'IT Can Be Dangerous' I got to blend writing and programming into my favourite genre - crime fiction. I put a lot of work into making the programming sections accessible though so don't be intimidated... if you're a mystery fan, this is the book for you!

This book is a sharply acerbic and insightful detective story which brings together several tropes of the current zeitgeist - blending comedy reminiscent of "The Office" with the careful plot structure of the great detective writers and achingly cutting edge knowledge a la Douglas Coupland - all the petty office politics and daily drudgery any office worker faces are mercilessly lampooned and cleverly enlivened with vignettes on the glamour of working in London and the likeability of the main character. Added to this the insights into the culture of some of the best paid workers in the world - computer programmers - is fascinating and not only does not debunk the myth of the computer genius but actually inadvertently and amusingly reveals the reasons why they are so well rewarded. This book is a great read carefully crafted without a wasted phrase or an unnecessary paragraph and i'd be surprised if you don't finish it in a weekend so find yourself a few hours to relax and enjoy !

You have subscribed to alerts for Ita Ryan.

You have been added to Ita Ryan's favorite list.

You can also sign-up to receive email notifications whenever Ita Ryan releases a new book.