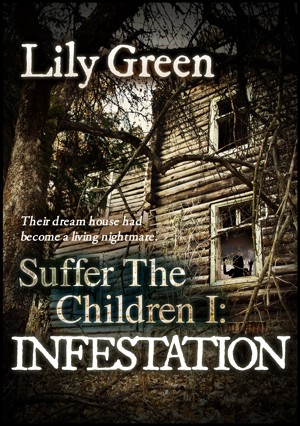 Rated 5.00/5 based on 1 reviews
It’s a new land and a new house for a family of four. Then a day after their housewarming party, things start to happen - shadows going against the light, images in the periphery of their visions, voices that mimic theirs, waking nightmares and dreadful dreams, tracks outside their house, and dead animals near the back door. Who are they that are making their dream house into a living nightmare? More
A NEW HOUSE, A HAPPY FAMILY, AND NIGHTMARES
THEIR DREAM HOUSE HAS BECOME A LIVING NIGHTMARE

A huge patch of land by the river surrounded by trees and with a price that’s practically a steal? Situated by Red River in Burkburnett, Texas, it is peaceful and not too far from the center of the city. It is an offer that husband and wife Jim and Sue cannot refuse. A trucker by trade and a father of two, renting out an apartment no longer suits his family’s needs. The couple secured a loan that not only gets them the land but also a house.

The two-storey house that they have built fits perfectly with the surroundings. Wooded areas shielded them from the outside and if they fancy a dip, the river at the back is always available. It is literally the beginning of THE GOOD LIFE for the family.

Then a day after their official housewarming party, SCARY events begin to happen - shadows going against the light, images in the periphery of their vision, voices that mimicked theirs, and HORRIFIC nightmares. The eldest daughter falls sick while the youngest starts to converse with an imaginary friend. As if these aren't enough, Jim and Susan discover tracks outside their house and dead animals in the backyard. The events did not give them rest. As the hours pass, their frequency increase.

Will you still fight for your DREAM HOUSE when it has become a LIVING NIGHTMARE?

*** Warning: This book contains graphical descriptions of gruesome and sickening scenes. This is not for the squeamish. If you get easily scared or offended, do not proceed. ***

BONUS PREVIEW AT THE END OF THE BOOK!
EXCERPT
JIM WAS NOT sure if he was dreaming.

He was in the bedroom. The dimness of their room increased the sensitivity of his ears. For many moments, it was silent. He lay still, listening.

Jim decided to go back to sleep after a while. He even turned over to one side. But when he closed his eyes again, the sound magnified around him. He began to hear a consistent panting and now that he was hearing this detail, the stronger it got until it felt like the sound was from inside the room. But he was alone. He listened some more to make sure he wasn’t just imagining things. But the sound would not go away. The panting would not stop.

Jim abruptly got out of bed and faced the side where his back was to. The sound was still audible, but there was nothing—no presence there.

He listened hard and approached the direction where he thought the sound came from. Ahh, it came from outside the room. The door was open and light and shadows filtered in. Something passed by, momentarily cutting off the light that streaked through the door.

Lily Green is 41, divorced, and lives in Pacific Heights, San Francisco. She has two sons—Michael, 22 and Todd, 18.
Lily has a dark past—she was adopted as a child by a well-meaning, homey schoolteacher and her husband, a bartender. Her adopted father abused her as a child, and in her late teens, she decided she had had enough and reported the incident both to her mom, and the local police. Her mother, instead of coming to her aid, decided to evict her. Lily, therefore, had to move into the city and fend for herself, working odd jobs to put herself through college. She married Howard, a fellow student, and father to both her sons. They parted ways when Todd was 3.
Michael is in medical school—an intern—with a pre-med degree in Psychiatry. Michael resides in L.A.
Todd is a student at San Francisco University, taking up Dance as his major. Both Michael and Todd are single.
Her former husband is Howard, head of an architecture firm. Though he and Lily are estranged, he helps put the kids through college.
Lily herself was a dance choreographer—and now teaches Development of Dance Techniques and Dance Theory—part time.
She is known to date men several years her junior, as she finds most men her age or older to be “too serious” and “boring." She has a healthy appetite for sex, but finds getting into a serious relationship for long periods “a waste of time." She feels she has yet to find a man her equal both intellectually and physically.
She does not believe in “love”—she defines relationships as a meeting of minds and a consensual approval of helping the other grow.
Lily is into organic food and is a health and exercise buff (though mostly incidental—the exercising helps “clear her mind”). She is into “centering” and yoga. She has yet to give up smoking, though. She loves to shop but within reason. Anything excessive and lavish has to be justified, she feels.
Lily is deeply into social work (she is a member of the local LGBT group as a generous donor for free HIV testing drives, among other advocacies.). She is also an advocate for animal adoption. She describes herself as “a city girl with a small-town heart."

What would you do if you heard disembodied voices,and had nightmares, seen ghosts and weird things happen in your home would you stay ? This book had all of it . 5/5 STARS

You have subscribed to alerts for Lily Green.

You have been added to Lily Green's favorite list.

You can also sign-up to receive email notifications whenever Lily Green releases a new book.