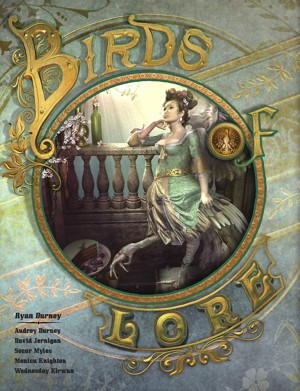 Each entry touches on the origins of a fantasy bird, or the most interesting parts of its history, while the wayward Mythologist deals with them in his reality.

Based on a mysterious “found journal” and fully illustrated by talented artists, Birds of Lore is the closest you can get to mythological bird watching (without losing a finger).

This modern bird bestiary could be described as a picture book for older readers, a cautionary sci-fi / fairy tale or one of the most unique coffee table art books you'll ever pick up.

He uses inks, paints and digital techniques to create a unique look. One review described his work as "pearlescent." Ryan's images are always straddling the fence between something classic and something that feels altogether new. His most recent series, "Birds of Lore" mixed medieval and Victorian influences with modern illustrative thinking.

Ryan has been a featured illustrator of over 36 issues of ODYSSEY Magazine, and was recently the sole illustrator chosen for their retrospective collection.

He has won several awards for his work, including many international competitions such as Best of Fantasy, and Society of Illustrators West #45, as well as a Mom's Choice Award in 2012 and 2011. All-in-all, though, he counts being voted in by the kids for a Children's Choice Award as his favorite recognition.

Ryan is also a published author of nonfiction children's books as well as fiction.

He works in a teeny studio alongside his lovely and equally artistically-talented wife, Audrey Durney, as well as his disintegrating pug, Roy Allen. 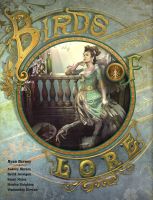 You have subscribed to alerts for Ryan Durney.

You have been added to Ryan Durney's favorite list.

You can also sign-up to receive email notifications whenever Ryan Durney releases a new book.