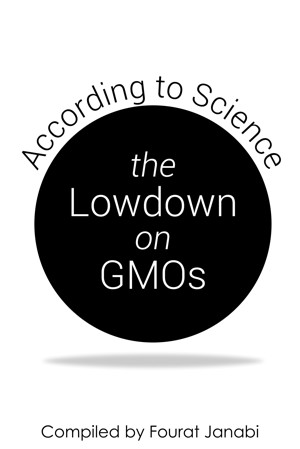 The Lowdown on GMOs: According to Science

By Fourat Janabi
Distrust of GMOs has increased in recent years from initiatives to label, ban, or warn the public. The Lowdown on GMOs features contributions by public scientists, authors, farmers, science writers and journalists answering the hard questions with elegance, ease, and evidence. This is a book for those who want to know what the evidence says and the implications of our actions regarding GMOs. More
Public distrust of GMOs has increased in recent years. The animosity is everywhere; from initiatives popping up left, right, and center to label'em, ban'em, or warn the public. The media overplays the reports and plays into the deft game of extrapolating far beyond what the science says as well as ignoring expert opinion on what the science actually implies.

The Lowdown on GMOs: According to Science is THE book on GMOs intended to counter the rampant fallacious thinking and destructive activism permeating the biotech discussion based on little more than anecdote and ideology.

This is a book for those who want to know what the science actually says, where the evidence actually leads and the potential implications radiating from our actions.

Fourat Janabi is a photographer, and author of Random Rationality and S3: Science, Statistics and Skepticism.

With help from the scientific community, he has also compiled a book on GMOs: The Lowdown on GMOs According to Science featuring chapters by Mark Lynas, Ramez Naam, and others involved in the science and exposition of biotechnology. He also, when time permits, write at Enquiries on Atheism, along with having featured posts on Genetic Literacy Project and Outside the Hype.

In his spare time, he drinks copious amounts of wine, plays soccer, explores cutting edge technology, and travels the world. He claims no title other than that of self-educated layman.

Reviews of The Lowdown on GMOs: According to Science by Fourat Janabi

You have subscribed to alerts for Fourat Janabi.

You have been added to Fourat Janabi's favorite list.

You can also sign-up to receive email notifications whenever Fourat Janabi releases a new book.