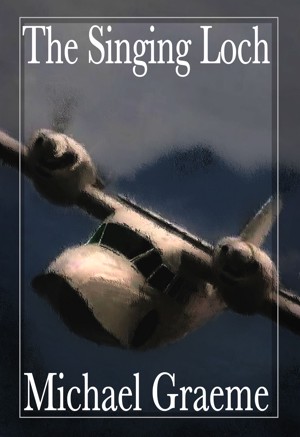 By Michael Graeme
Rated 4.00/5 based on 2 reviews
Disillusioned city worker, Scott Matthews, is drawn into a dangerous corporate conspiracy. From the greed of '80's London, to the austere beauty of Western Scotland, Scott unravels an enigma dating back centuries, while gradually falling under the spell of the mysterious and forbidden Singing Loch. Here he discovers love, enlightenment, and ultimately a truth more startling than legend. More
Dispatched by his employer to a remote Scottish estate in order to investigate the purchase of an hotel, Scott gets a hostile reception from the management, but a warm welcome from the locals, and a very warm welcome indeed from Iona Macvie, the minister's daughter. Here, he discovers a small, idyllic community, but one also in revolt, at the mercy of remote corporate landlords, the life blood of its youth being inexorably displaced by a vast blanket of commercial forestry. There's something sinister stalking the hills too - an old ghost from legend maybe, but if that's all it is, then why does the head keeper have the cut of an ex special forces type, and why does he carry a revolver?

Reviews of The Singing Loch by Michael Graeme

From the book's description: "This is a story about land, about those who own it and about those who dare to trespass upon it." It certainly is that, but it's also a love story and a thrilling adventure tale with a mystery at its heart. The author is an enthusiastic hill walker, and his lyrical descriptions of the landscapes of Scotland's Western Highlands reflect this.
This is also a coming-of-age story. The narrator, Scott Matthews, is a young man dissatisfied with his career and love life. As he lurches from one awkward situation to another, the opportunities that present themselves and the choices he makes teach life lessons and bring a variety of rewards. I had the feeling Scott was telling the story several decades after the events occurred; it was a surprise to learn that he is only 27 years old. Moreover, at one point he says his parents are no longer living, but without any comment on what surely must have been premature deaths.
The book begins with a prologue consisting of rather depressing thoughts about the greyness of urban life. Once through that and engaged with the story, I wondered what created this view in a young person who had lived in urban environments until a work assignment took him to rural Scotland. A bit more about Scott's family and early years might have explained this.
Reservations aside, I heartily recommend this book to readers looking for a romantic adventure set in the Scottish Highlands.

This is a very nice "Let's escape from the soul-sucking modern urban world and move back to wild nature" story. My enjoyment of it was likely enhanced because I was at home in an urban area when I began it and ended it just after spending a day rambling in rural Orkney.

But unlike the protagonist, I rather enjoy cities and find a lot in them that's vibrant, alive, and hopeful. I also love the outdoors and nature, so I could appreciate the pull of wild moors, breathtakingly beautiful mountains, and crystal lochs. In trying to decide whether I liked this book by Michael Graeme enough to give it four or five stars, I had to consider whether I was being objective, or mildly resentful for portraying cities as "grey", "soul-less", and lacking of meaningful human interaction. And though protagonist Scott Matthews was generally referring to London and Glasgow of the 1980s (the settings of much of the book), there was enough universalizing that I occasionally muttered to him, "Then move already, damn it, and stop whining! It's obvious that you're going to".

The Singing Loch has a very nice narrative flow, well-drawn characters, and lovely descriptions of rural Scotland. It has just enough romance to give it a little charm, but not enough to detract from the more interesting tension between humans and their place in nature, and the competing interests of corporations and individuals where land use is concerned. I was all set to give it a five, but at the last minute switched to a four. That's not because of the (relatively minor) typos or the fact that I'd pretty much worked out the mystery on my own before the reveal. It's a free book currently on Smashwords, so I won't quibble on those. (And the typos are simply that and not grammatical atrocities; the author is obviously a good writer.) It's just that the city-lover in me found the last bit a little simplistic and preachy in its exhortation to humanity. I agree with much of what it said, but as I said earlier, I might have been a little annoyed on behalf of cities and their own bit of wild life. In any case, I liked it very much and recommend it.