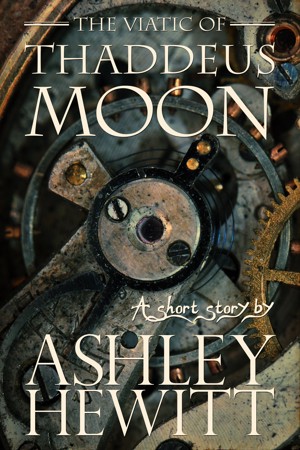 The Viatic of Thaddeus Moon

By Ashley Hewitt
Rated 4.67/5 based on 3 reviews
A thief extraordinaire and general rapscallion teams up with his old partner in crime, an intelligent woman of humble upbringing and excellent swordsmanship, in order to escape the wrath of a vengeful inspector. More
The first installment in a series of thrilling tales of high stakes Victorian adventure, The Viatic of Thaddues Moon is a story of exhilarating heroics and narrow escapes. Thaddeus Moon, thief extraordinaire, finds himself trapped in a prison cell beneath the streets of Victorian era London, with nothing to aid him but his wit and a friend on the outside. Things are not going well for Thaddeus, who quickly finds himself at the end of his rope, or more accurately, on his way to that of a hangman. When a sudden explosion tears through the walls of the cell, his interrogation at the hands of a vengeful inspector comes to an abrupt halt. With his old partner coming to his rescue, the duo must outrun and outsmart the police as they rush to the docks and the ship that can carry them to safety.
Download: epub mobi (Kindle) pdf more Online Reader
rtf lrf pdb txt
Price: Free! USD
Add to Library
Create Widget
Tags: fiction adventure humor victorian steampunk london rescue thief escape chase alternative history airship
About Ashley Hewitt

Ashley Hewitt a recent graduate of Full Sail University, where she earned a Bachelor of Fine Arts degree in Creative Writing for Entertainment.

In the past, her work has been featured in the local literary magazine Wood Whispers. During her career at Full Sail, Ashley has completed four short film scripts, numerous short stories, and two television pilot spec scripts, one of which received a Course Director’s Award in November 2012.

In addition to writing, Ashley is an avid web designer and has completed projects for many clients who work in the entertainment industry.

You may reach her at ashley@heshley.com

I will second Nila Brown's comments.

I really enjoyed it. The characters really pulled me in and before you knew it, it was over. I hope you add to this and create a series.

Good fun - an incorrigible anti-hero,an alluring and loyal heroine and a doggedly persistent policeman. I look forward to reading more of their adventures.

You have subscribed to alerts for Ashley Hewitt.

You have been added to Ashley Hewitt's favorite list.

You can also sign-up to receive email notifications whenever Ashley Hewitt releases a new book.