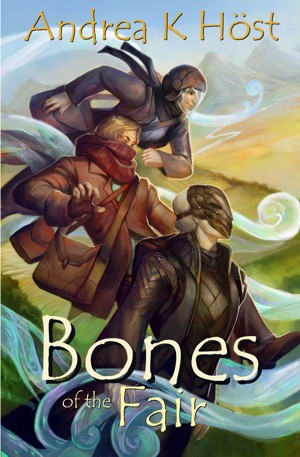 Bones of the Fair

By Andrea K Höst
Rated 5.00/5 based on 1 review
When the Atlaran Ambassador and half the heirs of the western kingdoms disappear on the kingdom of Darest's border, Gentian Calder agrees to join the Diamond Coeurveur and his apprentice in a rush to join the search. Will they find the missing? A plot against Darest? Or uncover older secrets, buried deep? More
Darest stands on the verge of a Golden Age. The revival of the Rathen line and a blood price won from the Fair has drawn a flood of visitors eager to snatch their share of changing fortune – or at least one of the fabulous prizes offered at the Spring Festival.

Among those coaxed back to the once-failing kingdom is Gentian Calder, daughter of Shapers. Before she can decide whether to risk her life by staying, news arrives to put all other considerations aside. The Atlaran Ambassador and half the heirs of the western kingdoms have disappeared on Darest's border.

About the Series: Darest

A kingdom on the edges of Faerie.

Reviews of Bones of the Fair by Andrea K Höst

This is my favorite of Andrea's so far.

Following the restoration of the Rathen throne, Gentian returns to Darest after spending more than a decade in self-imposed exile. She knows that breaking the oath she made never to return will have consequences. Just as she knows that every dawn she spends in Darest she will wake in utter terror, knowing herself to be on the brink of destruction. Gentian is willing to suffer to live in the homeland that she loves.

She is quickly bound up with a major character from the last book, Aristide Coeurveur, and the politics of Darest. The heirs of a few neighboring kingdoms have disappeared on Darest's borders, creating a political nightmare for Darest. Aspen, also from Champion of the Rose, rounds out the Darest delegation and brings a flirty POV that contrasts Gentian well.

Gentian's inner struggles and the external conflict, as well as her understated romance, all compliment and interweave well. Bones of the Fair also reveals a few of Darest's secrets and creates new questions about the kingdoms future. It will be interesting to see what the next book brings.