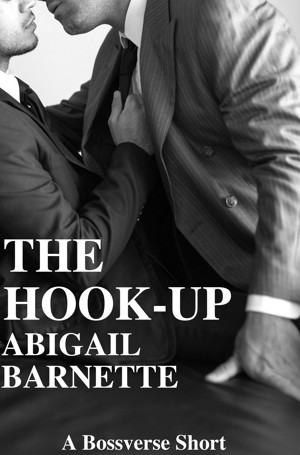 Rated 4.50/5 based on 4 reviews
In this short story/missing scene from Abigail Barnette's upcoming release, The Bride (March 2014), billionaire Neil Elwood tries to adjust to life after cancer, and Sophie suggests that a one-on-one night with their lover, Emir, might show Neil that surrendering control can feel so, so good... More
After cancer put a year of his life on hold, Neil Elwood is finally back where he thought he belonged, at the head of his media empire. But when the job takes him to London and away from his girlfriend, Sophie, he begins to reevaluate his priorities.

Neil isn’t sure what to expect when Sophie suggests a one-on-one night between him and their lover, Emir. When the two men have dinner together, sparks fly, and Neil recognizes a rare opportunity to give sexual submission another try.

Reviews of The Hook-Up by Abigail Barnette

The boss is someone who governs.... I felt the touch of masculinity St the start. Though I liked the middle.

I love The Boss series, specially Neil and Sophie characters. When Hook Up was published as a “missing scene” presenting a special date between Neil and Emir, under unusual roles, Neil’s point of view I was totally hooked. I loved it! Loved so much that I must suggest to Abigail Barnette to create an entirely series dedicated to Neil’s youth. Would be awesome.

(review of free book)
Isla Sinclair reviewed on July 31, 2014
(no rating)
Grabbing this one based on the summary alone! Sounds delicious.

Since I haven't read the novels yet, this free short story (set after The Boss and The Girlfriend) is my introduction to the "Boss-verse". Rumour has it the series was created as an "anti-Fifty Shades of Grey" - Dom/sub, boss/employee, billionaire/middle-class, but without the abuse. That seems fair, but it does mean the inclusion of tropes that piss me off: Both parties in a couple are never truly happy without the other, the most insecure in the relationship is the most loved, etc.

So yeah, the beginning and ending don't work for me because they're Neil/Sophie lovey/lusty talk. But the middle with Neil and Emir is AWESOME and actually ground-breaking for me as a reader. Condoms and lube are both common in the romances I've read - as they should be - but The Hook-Up also features condom-oral, dental dams, and latex gloves (which I've never read in fiction unless a sex worker is involved). Sure, Neil and Sophie probably go unprotected because One True Love, but this is the story's unspoken nod that infections do exist in Fictionland after all. (Perhaps even unwanted pregnancies; who knows?)

Overall, a pretty great introduction to the Boss-verse, and at such a fabulous price (it's legally free) it shouldn't be missed.

Au contraire previous reviewer this was paty dripping hot! Straight or not the visual, the dialogue and the desrciptions of this laison was sexy as hell.

You have subscribed to Smashwords Alerts new release notifications for Abigail Barnette.

You have been added to Abigail Barnette's favorite list.

You can also sign-up to receive email notifications whenever Abigail Barnette releases a new book.