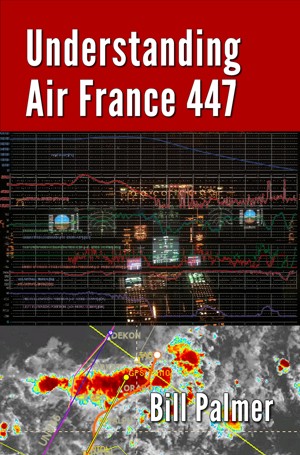 The book details the crew's failure to maintain aircraft control after a minor failure.
Written by A330 Captain, Bill Palmer, this book opens to understanding the actions of the crew, how they failed to understand and control the problem, and how the airplane works and the part it played. All in easy to understand terms.
Addressed are the many contributing aspects of weather, human factors, and airplane system operation and design that the crew could not recover from. How each contributed is covered in detail along with what has been done, and needs to be done in the future to prevent this from happening again.

Bill Palmer is a currently an A330 captain for a major international airline.

As a member of his airline's A330 development team for the introduction of the airplane to its fleet, he has been intimately involved in A330 fleet since 2002. He was the lead author and editor for the airline's A330 systems manual, and has written numerous A330 training publications. He has served as an airplane and simulator instructor, check airman, designated examiner, and also on training related projects from video production to simulator certification.

Bill started flying at the age of 15, soloed on his 16th birthday and completed his private certificate at 17. He attended Embry-Riddle Aeronautical University and holds a BS in Aeronautical Science. He earned his flight instructor certificate in 1978 and has been instructing almost non-stop since then, while holding airplane, instrument, multi-engine, and ground instructor certificates. Besides light aircraft he has also taught on the 727, 757, A320, DC-10, and A330, and written manuals for the DC-10, A330, B-787, and A350 fleets. He has also produced numerous training publications and videos for the various fleets as well.

You have subscribed to alerts for Bill Palmer.

You have been added to Bill Palmer's favorite list.

You can also sign-up to receive email notifications whenever Bill Palmer releases a new book.