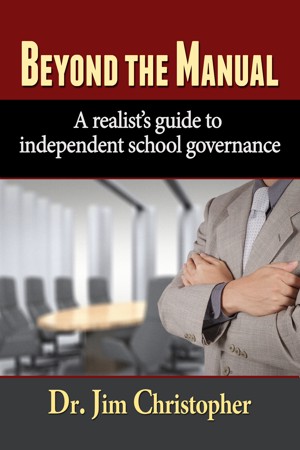 Beyond the Manual: A Realist's Guide to Independent School Governance

By Jim Christopher
Many independent schools are poorly, or at least erratically, governed. No matter which direction people point the finger of blame, a failed or failing school has usually fallen victim to ineffective school leadership and that is invariably a product of poor governance. This practical guide goes beyond the textbook definitions of governance to explore the realities of how Boards actually work.
Download: epub mobi (Kindle) pdf more Online Reader
rtf lrf pdb txt
Price: Free! USD
Add to Library
Create Widget
Tags: governance boards of directors independent schools
About Jim Christopher

Dr. Jim Christopher was appointed Head of Kenneth Gordon Maplewood School in the Spring of 2012. Prior to coming to KGMS, Dr. Christopher was Head of Somersfield Academy, a pre-primary to Grade 10 Montessori and IB/MYP school in Devonshire Bermuda. Over his career, Jim has served as Executive Director of the Canadian Association of Independent Schools and the Canadian Educational Standards Institute for nine years; was Head of Weston School, a school for underachieving and learning disabled students, in Montreal; and, had a long and successful career in the public education system in Ontario Canada where he was a teacher, elementary and secondary Principal, and ultimately Superintendent of Schools in a large rural school district.
Dr. Christopher is a graduate in Honours History from Trinity College at the University of Toronto; has a Bachelor of Education in History; a Masters in Curriculum; and his doctorate in educational administration. Jim Christopher is the author of numerous books and articles on European and North American History; Gifted Education; strategic planning; independent school governance; and, the effective use of technology in schools.
Dr. Christopher, and his wife, Rheanne Stevens, moved from Bermuda to North Vancouver, British Columbia in the summer of 2012 with their two sons, Morgan and Quinn.

You have subscribed to alerts for Jim Christopher.

You have been added to Jim Christopher's favorite list.

You can also sign-up to receive email notifications whenever Jim Christopher releases a new book.