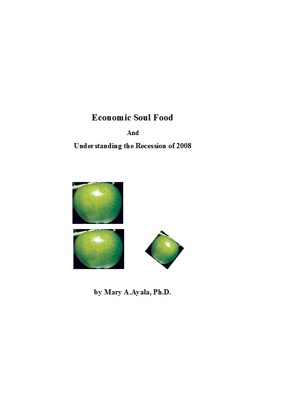 Economic Soul Food and Understanding the Recession of 2008

By Mary Ayala
This book is a necessity for people on the go who need a concise, complete overview of the U.S. economy's problematic 2008 recession, and a description of the federal programs that delayed the recovery from it.Dr. Ayala explains why these programs failed;and she highlights the changes in public policy that are needed to prepare the U.S. for global competition.

During my previous 25 years as a professional economist, I held senior level positions in 3 different state agencies. During my tenure in FY2008-09 as the chief economist for a Washington state agency, I disagreed with the state economist and political pundits who asserted that the recession of 2008 would end in June 2009. Therefore, I decided to privately publish short articles online about the causes of the Recession of 2008 which is not simply a consequence of the actions of a deregulated U.S. financial sector as portrayed in the extremely popular 2015 movie, "The Big Short". Economic Soul Food and Understanding the Recession of 2008" is a collection of the articles that I published online between 2008 and 2010.

A Ph.D.graduate of the Univserity of Miami with specializations in labor, international economics and financial economics, I enjoyed working occasionally with nationally recognized consulting firms, and previously taught economics, research methods and related college level courses in both Florida and Oregon. I graduated with a BA degree in math and statistics from SUNY.

You have subscribed to alerts for Mary Ayala.

You have been added to Mary Ayala's favorite list.

You can also sign-up to receive email notifications whenever Mary Ayala releases a new book.