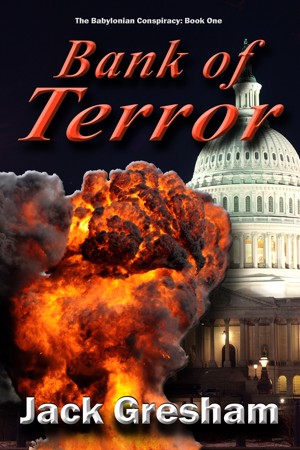 By Jack Gresham
How can one walk away from a culture ingrained with a single objective over hundreds of years and settle in a new land, to be conformed to a way of life that is foreign and intolerant of beliefs that are held dear and sacred? Muslim Afghan refugees come to America as young children and grow up conforming to societal demands until one day, early middle age, they respond to the call to jihad. More
Book One, Bank of Terror, is framed in our present time line that ventures into a fictional future. In 1980, half way around the world from each other, Mohammed, Marsha Phillips, and Michael Finnerty begin life in unusual circumstances. They will be mixed in an international terrorist plot in 2013.
Mohammed’s followers steadily grow during the early years of his international promotion of a peaceful jihad. Many who follow him do so out of convictions similar to his own, but there are those who come along for the ride with the hope of someday converting him to a war of terror for the cause of jihad.
Such were the aspirations of an American terrorist cell who sent him the funds robbed from the New York Federal Reserve Bank under threat of a nuclear bomb planted in Washington D.C. Mohammed strives to find a way to return the stolen funds without betraying the trust of his Muslim brothers.
Available ebook formats: epub mobi pdf rtf lrf pdb txt html
First 20% Sample: epub mobi (Kindle) lrf more Online Reader
pdb
Price: $2.99 USD
Buy Add to Library Give as a Gift
How gifting works
Create Widget
Tags: terrorism intelligence new world order jihad banking
About Jack Gresham

I grew up in the small community of South Miami, Florida (population 300; twenty-two miles from downtown Miami). I enjoyed the sparsely settled South Dade area with sunny beaches and camping out along Snapper Creek.
In my early teens, I began my walk in the Christian faith with a commitment that has held fast throughout my life.
I attended public schools in the local area and upon graduating from Ponce de Leon High School in 1949 matriculated at Georgia Tech in the School of Aeronautical Engineering.

The Korean War brought to me a new calling. After two years of college, I qualified for cadet training in the USAF. After earning my wings, I spent three years in the Air Defense Command flying F86Ds out of McGuire AFB in New Jersey. My wife, Moena and two small children left the Air Force with me to return to the University of Miami and complete medical school.
Internship for one year, four years in residency, and a six months fellowship in surgery of the hand completed my post-graduate medical education, followed by almost forty years in private practice as an orthopedic surgeon. Five memorable years in the middle of my medical career were spent in Saudi Arabia while our children labored through college years 1980-85.

It was during those years, traveling around the globe once each year and making many side trips to other countries of interest that Moena and I experienced a wide variety of cultures and religions.

After returning to the States and before retiring, I went on many medical mission trips to The Ukraine, Brazil, and Africa. It was at Kijabe Station, about seventy kilometers north of Nairobi, Kenya, sitting on the edge of the Rift Valley that I experienced the greatest cultural distances between indigenous tribes and modern medicine.

It is my belief that people of all cultures need understanding and acceptance more than they need change.

Also in Series: The Babylonian Conspiracy

Reviews of Bank of Terror by Jack Gresham

You have subscribed to Smashwords Alerts new release notifications for Jack Gresham.

You have been added to Jack Gresham's favorite list.

You can also sign-up to receive email notifications whenever Jack Gresham releases a new book.