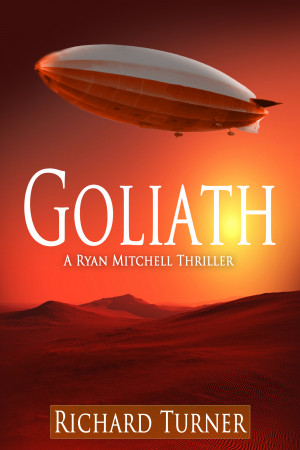 By Richard Turner
A secret long hidden.
An unforgiving foe.
A deadly race to save millions. More
In the summer of 1931, the British Airship Goliath on her maiden flight mysteriously vanishes without a trace over West Africa, taking with her a secret that people are willing to kill and die for.

Present day, an attempted kidnapping draws Ryan Mitchell into a deadly race to find the Goliath before a mysterious figure who threatens to topple governments and the lives of millions does. Joined by his team of former Special Forces operatives, Ryan Mitchell does everything he can to keep Jennifer March,a gifted historian, safe. From Ireland, to Alaska, to West Africa to Iceland the hunt for the truth is on.
Download: epub mobi (Kindle) pdf more Online Reader
lrf pdb txt
Price: Free! USD
Add to Library
Create Widget
Tags: thriller military goliath romanov military action adventure
About Richard Turner

Richard Turner proudly served his country for more than thirty years, all across the globe.

He wanted to try something new and now spends his time writing.

I am an avid reader and especially like reading all about history. Some of my favourite authors include: James Rollins, Andy McDermmott and the many novels of Clive Cussler.

About the Series: The Ryan Mitchell Thrillers

A thrilling series of action and adventure novels

Review
Hannes Birnbacher reviewed on June 1, 2016
(no rating)
I love reading, and books like this are the reason. There is action on every page. The author is an experienced writer. He makes me drive a car in a storm in Alaska myself, and share a Coffee in a tent in the Sahara. He remembers me of the Myriad of Stars I have seen in North Africa far away from human settlements. I am shure that he has been himself to the places in his books.

Of course, there is routine to be seen in "Goliath". The good are the Americans, ex-army, police or at least employed in American enterprises, the bad have Far-East or Russian names, preferably North Koreans. And there are no trifling or measly circumstances. The weapons are military grade up to the biggest, the politics do concern the biggest nations and the oldest conflicts. Is the plot plausible? err ... hmm ... honestly, the author has a far above average knowledge of physics, geology or weapons, but I hesitate to say yes. O yeah, what did I expect from an action story which could have been written by Beagley or Cussler ...

People are describe somewhat like in comics. This is no Gottfried Keller or John Steinbeck in understanding and characterizing human beings. Still, if you seek an epic love story, you will find it here.
And from where did I know that a German Sheperd Dog would play a role also in this novel from Richard Turner ... I considered lifting my rating by one star for this only but Turner decided to let the dog die ...
Three stars, please do not hesitate to download or purchase all you can get your hands on.

Remark: In my system, five stars is reserved for the most important SF of world literature, e.g. "1984" from George Orwell, and four stars for those I consider all-time best, for example Michael Crichton or some novels from Larry Niven.
This leaves three stars for really good Indie SF, but as everybody else at Smashworts does rate a SF novel at five stars if he liked it, I was detoriating the average rating of those authors I like best! So I decided to change my previous reviews, step by step, and repost them without the smashwords rating. Watch out for my rating in the review text instead!

You have subscribed to alerts for Richard Turner.

You have been added to Richard Turner's favorite list.

You can also sign-up to receive email notifications whenever Richard Turner releases a new book.