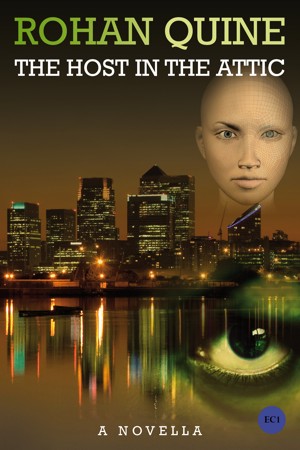 The Host in the Attic

Brilliant software engineer Rik and executive Jaymi work at digital agencies in London (surely unaware that their fates are destined to echo those of Basil and Dorian, respectively the painter and the subject of "The Picture of Dorian Gray"). Rik uses Jaymi’s appearance as the model or “skin” for a cutting-edge interactive hologram that navigates the Web in enhanced ways, tailored to every user. The dissolute bigwig “Champagne” Marc makes this into a business reality, and through his cynical eloquence electrifies Jaymi with the knowledge that Jaymi will hereby become the face of the Web. Throughout the film-shoot of Jaymi for the making of the skin, these honeyed words of Marc (like those of Wilde’s Lord Henry to Dorian during the portrait’s creation) light powerful fires of vanity and hubris behind Jaymi’s eyes.

As this holographic Web-guide’s hold over global information grows to a near monopoly, Jaymi is lionised, finding no door closed. But he yearns for still more: to see what the hologram itself can see online. So by trickery he succeeds in getting hold of a unique copy of the prototype hologram, with all regular filters removed.

In private files online he thereby discovers a not-yet-published novel that will come to be called "The Imagination Thief", by Alaia Danielle, with whom he has an intense romance (echoing Wilde’s actress Sibyl Vane with Dorian). But when Jaymi brutally dumps her, triggering her suicide, he is shocked to observe, on the same evening, that the face on his private prototype hologram has become crueller. Fascinated, he realises its appearance is changing in accordance with his own behaviour—and he hides it in his attic.

For years he uses his unique online access for ever more megalomaniacal ends, ruining the lives of many whom he lures down into excess, addiction and suicide. While the hologram in the attic deteriorates into quite terrifying corruption, Jaymi’s appearance remains as sweet and youthful as the day he was filmed … until the inevitable reckoning unfolds.

Rohan Quine is an author of literary fiction with a touch of magical realism and a dusting of horror. He grew up in South London, spent a couple of years in L.A. and then a decade in New York, where he ran around excitably, saying a few well-chosen words in various feature films and TV shows, such as "Zoolander", "Election", "Oz", "Third Watch", "100 Centre Street", "The Last Days of Disco", "The Basketball Diaries", "Spin City" and "Law & Order: Special Victims Unit" (see www.rohanquine.com/those-new-york-nineties/film-tv). He’s now living back in East London, with his boyfriend and two happy free-roaming house rabbits - a white down-ears and a black up-ears.

His novel THE BEASTS OF ELECTRA DRIVE (Winner in the NYC Big Book Award 2021, and a Finalist in the IAN Book of the Year Awards 2018) is a prequel to his other five tales, and a good place to start. See www.rohanquine.com/press-media/the-beasts-of-electra-drive-reviews-media for reviews by "Kirkus", "Bookmuse", "Bending the Bookshelf" and others. From Hollywood mansions to South Central motels, havoc and love are wrought across a mythic L.A., through the creations of games designer Jaymi, in a unique explosion of glamour and beauty, horror and enchantment, celebrating the magic of creativity itself.

In addition to its paperback format, his novel THE IMAGINATION THIEF (a Distinguished Favorite in the NYC Big Book Award 2021) is available as an ebook that contains links to film and audio and photographic content in conjunction with the text. See www.rohanquine.com/press-media/the-imagination-thief-reviews-media for some nice reviews in "The Guardian", "Bookmuse", "indieBerlin" and elsewhere. It’s about a web of secrets triggered by the stealing and copying of people’s imaginations and memories, the magic that can be conjured by images of people, the split between beauty and happiness, and the allure of power.

Four novellas - THE PLATINUM RAVEN, THE HOST IN THE ATTIC, APRICOT EYES and HALLUCINATION IN HONG KONG - are published as separate ebooks, and also as a single paperback THE PLATINUM RAVEN AND OTHER NOVELLAS (a Distinguished Favorite in the NYC Big Book Award 2021). See www.rohanquine.com/press-media/the-novellas-reviews-media for reviews of these novellas, including by Iris Murdoch, James Purdy, "Lambda Book Report" and "New York Press". Hunting as a pack, all four delve deep into the beauty, darkness and mirth of this predicament called life, where we seem to have been dropped without sufficient consultation ahead of time.

All titles are also available in audiobook and video-book format, performed by the author.

"Rohan Quine is one of the most original voices in the literary world today – and one of the most brilliant." - Guardian Books blogger Dan Holloway, who included Quine’s "The Imagination Thief" on his list of the six "best self-published books of the decade"

"A sensual ballet of rich characterisation, alluring subtlety and originality. 'The Beasts of Electra Drive' is a novel that I didn't want to put down while I was reading it. [...] I found myself underlining things on the page, throughout it, because of the allure of Quine's language. I was fascinated with the marriage of his vocabulary and his punctuation. [...] This book creates a luscious and sensuous effect, which you can expand into." - Suzi Rapport

"The swooping eloquence of this book ['The Imagination Thief'] had me hypnotised. Quine leaps into pools of imagery, delighting in what words can do. The fact that the reader is lured into joining this kaleidoscopic, elemental ballet marks this out as something fresh and unusual. In addition to the language, two other elements make their mark. The seaside ghost town with echoes of the past and the absorbing, varied and rich cast of characters. It’s a story with a concept, place and people you’ll find hard to leave." - JJ Marsh in "Bookmuse"

"Quine is renowned for his rich, inventive and original prose, and he is skilled at blending contemporary and ancient icons and themes." - Debbie Young in "Vine Leaves Literary Journal"

Reviews of The Host in the Attic by Rohan Quine

You have subscribed to Smashwords Alerts new release notifications for Rohan Quine.

You have been added to Rohan Quine's favorite list.

You can also sign-up to receive email notifications whenever Rohan Quine releases a new book.