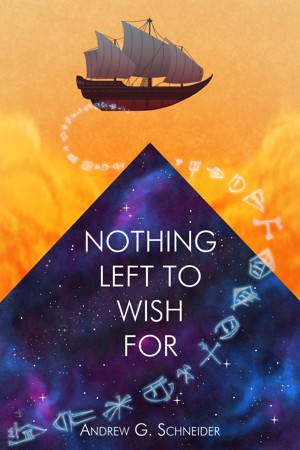 Nothing Left to Wish For

By Andrew G. Schneider
Rated 5.00/5 based on 2 reviews
A sandpunk story of high adventure! Sky pirates, space mummies, and a swashbuckling adventure you'll never forget! Esme, a sky pirate, sets out across the Endless Desert on a high-stakes voyage of unexpected self-discovery after she befriends Prince Sasha and his genie, Sting. More
Step onto the deck of the skyship, the Pirate Queen and join first mate Esme, Prince Sasha, and the genie Sting on a spectacular voyage across the Endless Desert. A botched raid on the treasure galleon, the Desert Jewel, earns Esme the enmity of the high wizard al-Hasan and a bounty on her head that leaves her with few friends and fewer options. Forced to choose between her life, her sanity, or secrets best left buried beneath the sands, Esme’s choices will, one way or another, leave her with nothing left to wish for.
Available ebook formats: epub mobi pdf lrf pdb txt html
First 15% Sample: epub mobi (Kindle) lrf more Online Reader
pdb
Price: $5.99 USD
Buy Add to Library Give as a Gift
How gifting works
Create Widget
Tags: adventure pirate heroine sailing fantasy adventure strong female character djinn genie swashbuckling skyship ifrit marid desert adventure rune magic sky pirate arabian myth
About Andrew G. Schneider

Andrew G. Schneider always wanted to be a wizard when he grew up; now he makes magic with words. In addition to his novels, he is the author/designer of the critically acclaimed RPG, Nocked! True Tales of Robin Hood. When not writing, he hunts the wild dust bunny and makes a mean pot of French onion soup. He lives in Washington, D.C., believes in unicorns, and is married to a wonderful woman who believes in him.

Reviews of Nothing Left to Wish For by Andrew G. Schneider

In addition to a compelling plot, I was very impressed by the way the author evokes detailed images and fantastical places without spending a lot of time on descriptions. I was able to picture Esme's world so vividly without any breaks in the action. I also liked that there was a journey of self-discovery woven into the fast-paced adventure. It was both a thoroughly enjoyable read and a poignant tale with characters that really stuck with me even after I finished the book. I can't wait to read more from Mr. Schneider!

Nothing Left to Wish For is a swashbuckling tale in an unforgiving desert world. The story starts with sky pirate Esmeralda, Esme for short, leading a raid of a local potentate’s ship seeking a rumored treasure of immeasurable value. Protagonist as pirate isn’t that unusual, particularly nowadays, but the real reversal comes when she discovers the nature of the cargo, an effete young man who declares himself Sasha, the governor’s son and worth a prince’s ransom. Esme and Sasha face a range of dangers (which notably includes each other) as they both seek their freedom in a harsh world.

The world Andrew Schneider crafts is fantastical, but with a consistency that will appeal to fans of steampunk, space opera, and genres in between. The runes that power the flying ships are also used in weapons and enable the grafted arm Esme uses to captain ships and flying carpets and to give her an edge over her opposition. However, this shortcut often comes with a cost, as attested to by the lower level denizens of the flying cities, suffering from rune rot and ignored by the masses barely getting by in their own right.

How does nothing Left to Wish For stand out from the pack? The author is a friend, but even so I’d say there’s something more remarkable about it even in a genre where heroines and dying worlds are not uncommon. Esme isn’t coming of age; the dark story is suitable for young adults but stars a woman with some questionable choices, a broken engagement, and a few years already behind her. Such women may be common in comedies and romances, but are less frequently seen in adventures. As a side note, the book is also plays against nautical type in that it is not an ensemble piece but is instead focused on a small number of core characters.

Nothing Left to Wish For is by turns exciting combat, treacherous ruins and adversaries, and exhilarating piloting. Esmeralda, and her interactions with those that she works with and against - often simultaneously - are quite memorable. She occupies a space between the rare archetypes of female hotshot and anti-heroine. If that appeals, but you want more of a sample of the writing and the world, check out the Noir prequel story: Cool with plenty of water (http://andrewgschneider.wordpress.com/about/cool-with-plenty-of-water/).

You have subscribed to Smashwords Alerts new release notifications for Andrew G. Schneider.

You have been added to Andrew G. Schneider's favorite list.

You can also sign-up to receive email notifications whenever Andrew G. Schneider releases a new book.