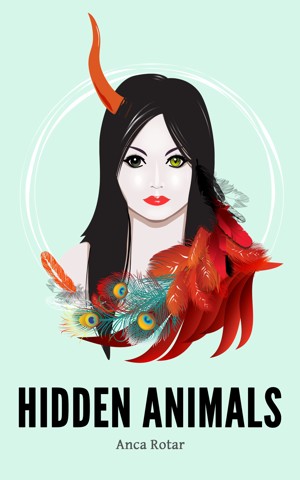 By Anca Rotar
Rated 5.00/5 based on 2 reviews
"Hidden Animals" is a collection of poems and short stories where fantastical creatures stand for all that is deeply hidden inside the human heart. More
Birds of all kinds live together mysteriously inside a country manor, a nobleman’s careless life is disturbed by an unexpected intruder, a monk travels a dying world in search of a god of chaos, and being the ruler of a fairy court is not all it’s made out to be. The Birds, symbolizing hope, faith and sometimes fatality, the Beasts that, in their various forms, embody the allure of danger and of all that is primal, and the Spirits, which have their subtle ways of influencing all action, come together into one Hidden Animal, which is nothing but the part of human nature that always remains mysterious and unexplained.

Anca Rotar is a Romanian-born writer of poetry and fiction. She was driven to writing by her love of stories and verse, as well as by an ever-increasing fascination with mysteries and the unknown. Her biggest complaint is that there are too many interesting things in the world and hardly enough time to discover them all.

An imaginative visceral empowering work of Art. This raw honest creative writing speaks of an emotional Universe in a language we can all comprehend if we're being honest with ourselves.

This writer will inspire you whether you like it or not. The words oscillate on the page and shake up your atoms. The verse bends and stretches your mind a bit like having a brain work out, and the stories are contemporary punchy deep and moving. I recommend this book. I seriously do.

‘Hidden Animals’ is exactly that. The title, suggestive of secrets, wildness, mystery & nature, perfectly describes the book itself. Its author, Anca Rotar, has split her work into three main parts: The Birds, The Beasts, The Spirits, but the whole thing starts with a single prologue poem, Thysia, a mission statement fearlessly addressed to the reader which contains in its bare bones both humour & the atmosphere of occultism. Half prayer/chant, half knowing wink in the readers direction, Thysia is a powerful way to open a collection & luckily for the reader it does not disappoint.
The first section, The Birds, consists mostly of poetry – the white space around the words is a sky, the lines are formations of birds. But don’t let this fool you into thinking the section lacks punch. There is both sadness & anger contained within the poetry, especially in The Lightless, whose opening lines: “When I am finally empty, / I suppose God can pour in” evokes the endless cycle of nature, the use & re-use of the holy.
This theme continues into The Beasts, a section which begins with a creation poem & ends with The White Wolf, one of the longer & one of this reviewers favourite short stories. There is a general concern throughout both it & the section as a whole with time & space, blood & bones. There is less humour than in The Birds but instead quirkiness takes more of a step forwards. From Sophia Says, for instance: “...the animal heads on the wall / bow as she passes by”.
This quirkiness turns once again into something different by the time we get to The Spirits. This section is by far the most playful, the rhyming The Wish Gone Wrong & the opening line of short story The Answer being prime examples: “I don’t know what the answer is, but let us imagine something.” However, everything also seems a little sharper. The short stories are more fragmented, the poetry brief and small, fleeting. It says something that the final piece of the section, Up the Stairway, deals with spiders & ends with an opening statement, going back once again to the cycle of nature. From birds to insects. This final section rounds the book off nicely & manages the not-easy task of tying the sections together. This, I believe, is the books greatest success. While each poem & story could definitely stand on its own, the themes & sense of purpose Rotar has woven throughout give the book a different identity, a sense of oneness, & at the end of the day it is this which made it a delight to read. ‘Hidden Animals’ is well worth finding.

You have subscribed to alerts for Anca Rotar.

You have been added to Anca Rotar's favorite list.

You can also sign-up to receive email notifications whenever Anca Rotar releases a new book.