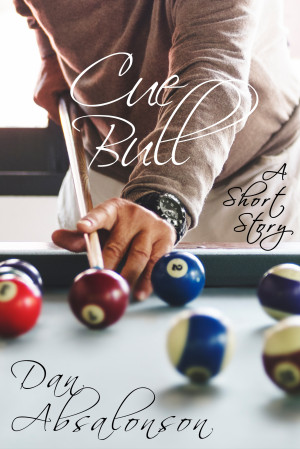 By Dan Absalonson
Rated 4.33/5 based on 3 reviews
George has given up hope on love finding him in this life and now his father, the person he was closest to, is gone. Is he destined to be alone forever? How will he sell the life sized bull statue his dad left him in his basement beside the pool table?
Available ebook formats: epub mobi pdf rtf lrf pdb txt html
First 50% Sample: epub mobi (Kindle) lrf more Online Reader
pdb
Price: $1.99 USD
Buy Add to Library Give as a Gift
How gifting works
Create Widget
Tags: love death bar a billiards pool bull
About Dan Absalonson

Dan first started writing stories in elementary school, where he and a friend would skip lunch and recess once a month to eat in the library while hearing all about the new books on the shelves. His love for reading, as with visual art and music, has now extended into creating his own fiction. He is also a huge fan of podcasting, and all of his stories are available for free in audio. He works as a digital artist and lives in Washington state with his beautiful family of five. Learn more at www.DanDanTheArtMan.com

Nicely done. I enjoyed reading it.

George a very lonely guy took care of his Dad in his later yrs. He had a life size bull statue in the corner of his basement, he called it Theodore. George was going to put it on the internet. Jimmy had told Frankie who owned a bar about it & she was going to give George $300.00 for it. Frankie had lost her dad also. She bought George a dink on the house.
Awesome book cover. A romantic twist to this short story. It would make a great movie or TV series. Very easy for me to give the short story (book) 5 stars.
Thank you for the free book (short story)
Tony Parsons MSW (Washburn)

You have subscribed to alerts for Dan Absalonson.

You have been added to Dan Absalonson's favorite list.

You can also sign-up to receive email notifications whenever Dan Absalonson releases a new book.