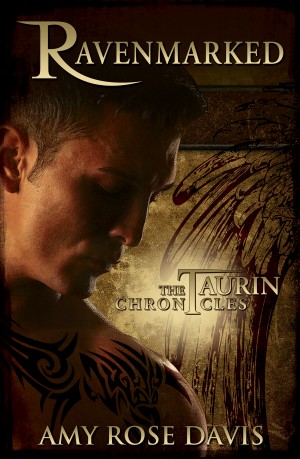 Rated 4.88/5 based on 8 reviews
Connor Mac Niall is a marked man. Destined by an ancient spirit to become an avenging angel, he has spent half his life try to escape his destiny. But when he's asked to escort a royal heir to safety, the journey brings him face to face old regrets and new threats. When he leads the heir into danger, he faces the ultimate choice: Submit to the magic, or let the royal heir die. More
For one with the ravenmark, there is no balance.

Connor Mac Niall has everything he wants. As the best freelance man-at-arms in the known world, his reputation brings him jobs that provide adventure, women, and money in abundance.

But Connor has a secret: He’s ravenmarked. The avenging spirit of the earth, known as the Morrag, has chosen him to be her angel of death–to kill those she wants killed. Connor has run from her call half his life, and working as a freelance helps him keep the need to kill quelled.

When Connor reluctantly agrees to escort a fleeing royal heir to safety, he has no idea that the journey will bring him face to face with the Morrag–and require that he choose between destiny and freedom. He finds himself confronted with old regrets and new choices. On one side pursued by a sorcerer who wants him dead and on the other side tempted by the Morrag to submit his will to hers, Connor unwittingly escorts his charge right into the path of greatest danger for them both. He faces a choice: Submit his will to the Morrag’s control, or let the royal heir die.

Set against a backdrop of romance, political instability, and magic, Ravenmarked is the first in a five-book epic fantasy series titled The Taurin Chronicles.

Amy is a freelance commercial copywriter and editor. In her spare time, she reads, knits, herds children, and writes fiction as a hobby. Amy and her family love to hike, camp, and spend time in the great outdoors of the Pacific Northwest.

Ravenmarked Trailer
For one with the ravenmark, there is no balance.

Tasked with transporting Mairead, the heir to the Taurin throne, to distant Sveklant by his mother, the Queen Maeve, Connor discovers that this is far more than his usual job. Tracked by a Forbidden, he must come to terms with who and what he is. At the same time, is Braedan, the usurper to the Taurin throne, all that he seems to be at first glance - a callous unbeliever who causes chaos in the realm? Igraine, Princess of Eirya, finally finds a purpose for her life in her appointment as ambassador to the kirok, but is that her ultimate purpose?

Ravenmarked is an easy book to read. Amy Rose Davis draws one into the world she has created, and skilfully shows it to the reader. The characters are all compelling, but don't make assumptions about any of them.

This book is one of the best epic fantasy books I've read in years. From the first page to the last one is drawn into the lives of Connor, Mairead, Braedan, Igraine and a host of other characters. I sometimes turned the pages on my kindle too soon in eagerness to read more - and then had to go back to get the full story. I look forward with anticipation to the day I can pick up Bloodbonded and reenter this marvellous world to see what happens next.

Reading this novel was like coming home. It sent me back in time to my teens when I devoured the books of Raymond E. Feist, David Eddings, and other weavers of fantasy. It reminded me why I love pure fantasy – not urban, not paranormal, not contemporary, or any other of those new fandangled concoctions. Sure, they are great if thats what you like, and I do like them when the stories are well told and not more of the same old. There just seems to be an overwhelming number of those books, and far less good, old school fantasy these days.

This novel is well written, with many threads beautifully intertwined. There are so many different story lines, all of which converge masterfully, leaving the reader set up for the next book in the series. The various characters are so real, and present, that I found myself believing what they believed – some of it which was at odds with the other characters, to the point that I wasn’t sure who I could trust to be on the right side of the battle. Sounds a little odd, doesn’t it? But it’s fantastic! It isn’t until close to the end of book one that more snippets of truth come to light and we begin to see the full spectrum of the world that Davis has created.

I can’t say enough good things about the world building. There are many elements at play and they are familiar enough to make the story accessible, but also unique enough to set it apart from other fantasy novels of this type.

This is not Amy’s first release, but it is the first novel she has published. She’s in the middle of writing the sequel, and I for one cannot wait for it to come out. Actually, I can, because I know it’s going to be well worth it. This is one self published author who knows how important it is to get the novel right before releasing it, and I have every faith that the second installment will be just as good as the first, if not better.

I think this one would have to be a 4.5 stars from me. If you haven’t braved the sometimes murky waters of self published novels yet, this would be a great place to start. She takes her craft seriously, and it shows.

I wasn't sure quite what to expect when I began this book, but I fell in love with the characters and the story. The writing was fantastic and Amy did an amazing job with the world building. It reads like a movie and I hope that someday it could be. I can't wait for the second one!

I'm not a huge fan of fantasy, especially Epic Fantasy, but I honestly enjoyed reading this book.

First off, and one of the most important things to me, the writing is superb. It was so easy to fall into and just as good as anything out there I would find on a book store shelf.

Second off, the characters are each unique and outstanding. Braedon, as the usurper of the throne, was the first pleasant surprise. Mairead, the proper royal heir, is the second.

And third, the world building is fantastic. There are so many elements to delve into with the story. Handily, there is a glossary included in the back of the book (I know it is difficult sometimes to "flip" back to it with most eReaders), but most of the words I managed to figure out as I read and I loved every minute of it. From the religion to the different groups, everything comes together in beautiful and interesting layers.


This was an amazing story that I enjoyed immensely. I can't wait for the second book!

This story has such am amazing mixture or romance and fighting! The reader is drawn to Connor and Mairead right from the start. The plot is complex, and the characters more so. I highly recommend this book for any fantasy fanatic. You won't be disappointed. :)

This is high fantasy in the style I enjoy. Having grown up on Robert Jordan and Tolkien, I was not disappointed in the complexity of the characters, the depth of the world-building, or the tangle of the plot. Nothing is as it seems, and I like it that way.

(Amy needs to hurry up and finish the next installment, I think).

A perfect balance of violence, romance, intrigue and magic all cleverly woven to keep you on the edge of your seat. Thoroughly enjoyable. Amy's development of characters is inspired, forcing you to question your preconceived notions. Thus, I find myself anxiously awaiting the next installment. Highly recommended.

This book was very enjoyable and left me wanting the next fantasy to begin. I am not usually a fantasy reader but Amy has used characters to catch your interest and keep you reading until the very end. There is magic, violence and enough romance for everyone. I highly recommend this book, but read it when you have time to enjoy.

You have subscribed to alerts for Amy Rose Davis.

You have been added to Amy Rose Davis's favorite list.

You can also sign-up to receive email notifications whenever Amy Rose Davis releases a new book.