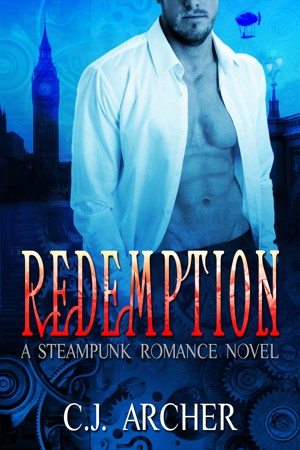 Rated 4.00/5 based on 2 reviews
"Ms. Archer has written a fascinating tale with a mix of intrigue, adventure, romance, danger ... Great job!" ~ Coffee Time Romance & More More
This book is also available with 3 other stories in THE 4 SCOUNDRELS BOX SET: A PIRATE, A SPY, A MERCENARY AND A ROGUE. Each book in the boxed set is available separately, but by buying them in a bundle, you're getting a better deal! Contains SURRENDER, REDEMPTION, THE MERCENARY'S PRICE, COURTING HIS COUNTESS.

DESCRIPTION
In a world where inventors have all the power and anyone born with natural talents is feared, Tilda Upton must hide her skill at finding things from the authorities. But when a ruthless inventor discovers her ability, she's forced to locate a secret weapon for him or be put to death. The only man who can help her is Black Jack Knight - sky pirate, vagabond, killer. But Jack does not like passengers on his airship, especially women whose vast talents are just beginning to be discovered. And especially women who get under his skin.

Together they fight corsairs, a mad inventor and their growing attraction to each other in order to retrieve the invention Tilda has been forced to find, only to learn it could destroy her.

A NOTE FROM THE AUTHOR:

If you've read my book HONOR BOOK, you may notice the similarities between Tilda, the heroine in REDEMPTION, and Isabel, the heroine in HONOR BOUND. They both have the same supernatural powers—telekinesis, healing, pyrokinesis and finding things with a talisman. This is entirely intentional and stems from my fascination with paranormal phenomena. Stories about people with these "abilities" have been around for centuries and I've often wondered if there's any truth in them.

There are other similarities between these books - a strong heroine and a sexy hero whose outward persona masks deep pain. It made them a challenge to write, but very rewarding too. I hope you agree!
~CJ

C.J. Archer is the USA Today bestselling author of historical fantasy novels including THE EMILY CHAMBERS SPIRIT MEDIUM TRILOGY, the FREAK HOUSE series, the MINISTRY OF CURIOSITIES series and the GLASS AND STEELE books. She has also written historical romances set in Elizabethan England.

C.J. has loved history and books for as long as she can remember and feels fortunate that she found a way to combine the two. She has at various times worked as a librarian, IT support person and technical writer but in her heart has always been a fiction writer. She lives in Melbourne, Australia, with her husband, 2 children and Coco the black and white cat.

Good steampunk romance with a hint of paranormal at a great price.

The Adventures of Miss Upton and the Sky Pirate is a swashbuckling romatic adventure in a steampunk Victorian England. Matilda Upton (Tilda) has some magical talent in an England that shuns and fears magic after an attempt on the life of the queen. She is discovered by Sir Magnus Grimshaw, Chief Royal Inventor, and blackmailed into using her skills to kidnap an Oriental inventor. She manages to convince the notorious pirate Black Jack Knight to assist her, and they are off on a round-the-world airship adventure.

The steampunk setting is well-established early, from the cover images, title and opening line. Perhaps a little too well-established - after a while it feels like being hit over the head with those brass and leather goggles. But there is certainly attention to detail in the worldbuilding. Archer has remembered the little things that add verisimilitude to a setting - a pet that is live instead of clockwork and a problematic air filtration system become plot devices instead of mere background detail.

One gripe I have is the use of the word "hellhag" to mean witch or magic-user. It's the only instance of smeerps in the novel and I really can't see any reason for it. The term witch was used long before the Victorian age; according to Wikipedia it [derives from the Old English nouns wicca "sorcerer, wizard" and wicce "sorceress, witch"] and [The modern spelling witch with the medial 't' first appears in the 16th century], so it should have been in regular usage even in an alternate steampunk Victorian England.

The plot is solid with equal attention to both the adventure and romance plots, however it reads more like a romance novel than an adventure. The romance is very predictable and a little contrived at times; anyone who has read a few romances will recognise the major elements. The adventure is more interesting and offers a few good twists. Fans of Amanda Quick, particularly her Vanza and Arcane Society series, would probably enjoy this novel.

The characters slide easily into their assigned roles, but there are a few pleasant surprises. While Tilda is the typical strong-willed, independent heroine of modern romance writing, Jack is a more thoughtful and level-headed hero than is typical. There is a major supporting character who proves more complex than at initial glance; he is substantial enough to warrant his own separate story.

The writing is generally good, though a bit stilted at times. Occasionally a few chunks of exposition are dropped in near the start of the novel, but they are not too unwieldy and do not interfere with the action too much. The pacing is good, but could be improved in parts, especially the romantic scenes. I would rate the romance as sweet/sensual; there is a sex scene but about the most explicit it gets is the word "nipple".

There were a few jarring elements. On her first encounter with Grimshaw, Tilda does not recognise his name. While it's realistic that she may not know his face, as one of the most influential advisors to the Queen I would expect her to recognise his name. It's not a plot point so it wouldn't affect the story at all if she did; if anything it would probably improve that scene were she to recognise the name immediately.

Tilda's Aunt Winifred, with whom Tilda and her younger sister Letitia reside, accompanies 24 year old Tilda to preserve propriety while leaving 18 year old Letitia behind with only the maid Mary to look after her.

Despite the attitude to witches and magic, fortune-tellers are apparently acceptable at typical English village markets.

Overall, a good debut effort from Archer and I would certainly read the further adventures of one of the main supporting characters - there are definite hints that he has a story of his own to tell. 3.5/5

You have subscribed to alerts for CJ Archer.

You have been added to CJ Archer's favorite list.

You can also sign-up to receive email notifications whenever CJ Archer releases a new book.