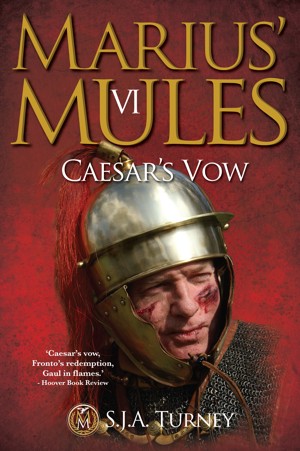 By S.J.A. Turney
It is the eve of destruction. Gaul seethes and bucks more than ever in revolt against the Roman invader just as Rome similarly begins to show its cracks. Caesar has made a vow to men and Gods alike to end the life of Ambiorix, and naught will stand in the way of that vow's completion - not Gaul, nor Roman, nor reason itself. Can Fronto halt the destruction of the Belgae and fulfill Caesar's vow? More
It is the eve of destruction.

Gaul seethes and bucks more than ever in revolt against the Roman invader, with even Caesar's allies beginning to question their loyalty. A conspiracy of Druids and Kings move the pieces into position in their great game of independence, all led by the powerful Arverni exile Vercingetorix. The lands of the Belgae burn in the vengeful aftermath of a winter that saw countless Romans butchered by the rebel Eburone King: Ambiorix.

As Rome similarly begins to show its cracks and the triumvirate of powerful men that have held together the crumbling Republic move ever further apart, so Fronto returns to the army, once more seeking his command under the great general.

But Caesar has made a vow to men and Gods alike to end the life of Ambiorix, and naught will stand in the way of that vow's completion - not Gaul, nor Roman, nor reason itself. As the world climbs towards the impending cataclysm, Fronto finds himself thrust with a small group of companions into the gloomy and dangerous sacred forest of his enemy in a hunt for the one man who can halt the general's wrath and fulfill Caesar's vow.
Available ebook formats: epub mobi pdf lrf pdb html
First 20% Sample: epub mobi (Kindle) lrf more Online Reader
pdb
Price: $5.49 USD
Buy Add to Library Give as a Gift
How gifting works
Create Widget
Tags: military war rome roman legion revolt caesar gaul vercingetorix
About S.J.A. Turney