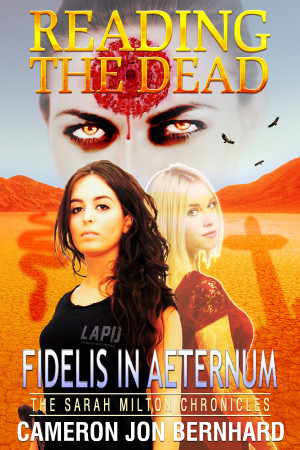 Reading The Dead: Fidelis In Aeternum

Rated 5.00/5 based on 1 reviews
The 2nd volume of the Reading The Dead series. LAPD detective Sarah Milton and her ghostly sidekick, Anna Nigma, face their greatest threat yet in a paranormal mystery involving her deadliest foe, the notorious "Fancy Dress Killer." The pair must hunt down a copycat on a mission of vengeance, with ties to a supernatural presence threatening not only their lives, but the fate of all they hold dear. More
The second volume of the Reading The Dead - The Sarah Milton Chronicles series.

A frantic phone call from the wife of her former partner plunges LAPD police detective Sarah Milton and her teenage poltergeist sidekick, Anna Nigma, into a deadly mystery involving one of their most dangerous foes, the convicted "Fancy Dress Killer," Harry Sands. The Violent Crimes Unit is in the hotseat to find the copycat serial killer responsible for a recent string of murders plaguing the city, leaving Sarah scrambling to understand the bizarre, otherworldly aspects to this latest murder spree.

Enemies from her past conspire with a new, even deadlier foe, in a thrilling adventure that threatens not only her life, but also the fate of those she holds dear, culminating in a supernatural showdown against an evil entity that ultimately tests the limits of her faith and courage.

Published since 2013, J.B. Cameron was forced to rebrand under the name "Cameron Jon Bernhard" to avoid conflicting with an identically named self-published writer. Though born in New Brunswick, Canada, his work shows more influence from an upbringing of American TV than his maritime roots. A writer who generally plays loose with the constraints of genre, Bernhard's dark style and black humor typically places fun, exciting characters in situations of suspense or urban horror, making an exciting roller coaster ride to both chill and amuse readers. Author of numerous novels, novellas and screenplays, his first published novel, "Reading The Dead - The Sarah Milton Chronicles," introduces a supernatural detective series unlike anything you'll find elsewhere.

About the Series: Reading The Dead

Bookish LAPD detective Sarah Milton, gifted with the ability to commune with the dead, along with her childhood "imaginary friend," a precocious 13-year old poltergeist nicknamed Anna Nigma, solve murder mysteries with a supernatural twist in this fun, exciting paranormal crime series.

Also in Series: Reading The Dead

Reading The Dead: Fidelius in Aeternum (The Sarah Milton Chronicles, #2)

I received a free copy, through LoP, in exchange for a review.

Now on to the next, or so Sarah Milton thought. She never really thought she would be revisiting the “Fancy Dress Killer” Harry Sands, since he was convicted and locked away. But now, copycat killings are starting to surface, leaving Sarah and Anna, her ghost partner in crime, trying to figure out are they truly just copycat killings or is there something more to it, something otherwordly? This investigation along with another one, where her former partner and mentor is being accused of murdering a woman, (another police officer) has Sarah right on the edge of sanity. A lot of surprises and old memories are going to be brought to the surface and hopefully Sarah and Anna can get to the bottom of the mystery, before more dead bodies show up.

'Sands wrapped his weapon in both hands, before looping it around the police officer's slender throat. He lifted her head by her windpipe, savoring her distressed gagging as she struggled for oxygen. Her body twisted and flopped under him as she attempted to free her hands and escape, but she couldn't move. Her attacker pinned her to the ground. Sands pulled her leash tighter, relishing the feeling of her life fading under his hands.
“Don't fight it, officer,” he breathed into her ear as he tugged her head further off the ground. “Death is the natural conclusion to everything. Give into it. Welcome its dark embrace as you would a lover.”

GREAT second book! I was so hooked, from the very beginning. Loved the pace of the story line and also all of the flashbacks. It explained what had happened between Sands' and Sarah's characters and how everything comes full circle. Highly recommend!

You have subscribed to alerts for Cameron Jon Bernhard.

You have been added to Cameron Jon Bernhard's favorite list.

You can also sign-up to receive email notifications whenever Cameron Jon Bernhard releases a new book.