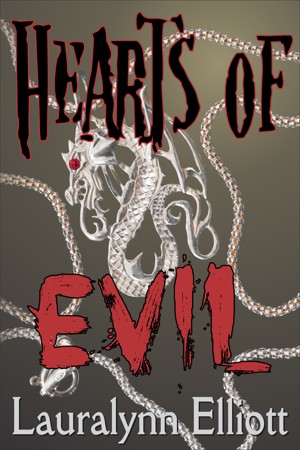 Reviews of Hearts of Evil by Lauralynn Elliott

After a traumatic experience living in the city of Atlanta, Lily Grey decides to have a quieter life and moves to a small Florida town. Even though the town of Eden Beach has a relatively small population, Lily finds it strange that everyone is very well of. As Lily is a writer, she is very inquisitive - especially when the townspeople seem to be hiding something. She has no idea just how evil the secret is, nor the lengths the people will go to protect it.Sheriff Rob Vega knows when to turn a blind eye in Eden Beach. Compared to some places in the world, the crime rate in his town is quite small. But lately he's becoming more and more uncomfortable with how these crimes were handled in the past. Rob is also worried about the beautiful newcomer. She has an air of innocence about her - someone with a pure heart. And in Eden Beach, that is a very rare thing.I could not get enough of this book!!! The mystery behind the shadowy figure was brilliantly written! I loved how Lily was strong and did not stop snooping even when she was warned off. I found this made her more realistic. (Let's face it - the moment people are told to not question something, that's when we question the matter at hand even more). I think Hearts of Evil, and all Lauralynn Elliott books I have read, have a creepiness that's old school. Her books take the reader on a journey where good battles evil, the bad guys are really vicious and the good guys aren't always too good to be true. Roll on the next Lauralynn Elliott book!!!