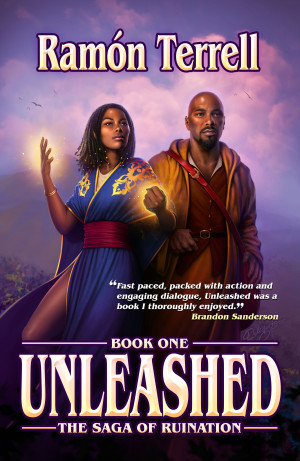 Unleashed: Saga of Ruination, Book I

By Ramon Terrell
Beside unfriendly companions, Emiel fights for his life and the lives of his daughters, and discovers a terrifying power lurking inside him.
Monsters at his back, war and uncertainty ahead, across darkening lands and hostile terrain trolled by vicious predators, nothing will stop Emiel from reaching his daughters before the power inside destroys him. More
In the bone-chilling spring, spice trades are lucrative and exhausting, and Emiel Dharr wants nothing more than to come home to a hot meal with his beloved daughters. But when he returns to an empty home and a note detailing his daughters’ kidnappings, the horrorstricken spicetrader will lose them forever, unless he travels beside a mercenary and a mysterious magus to the imposing city of Altarra to free them.

Beside unfriendly companions, Emiel travels across lands darkening under the specter of war, and finds himself targeted by ruthless leaders scrambling for an advantage. Nothing will stop him from saving his daughters, but the road becomes ever-more dangerous as monsters unseen for generations suddenly appear. Facing death at every step of his journey, Emiel accidentally awakens a terrifying power inside him. Is this coincidence, or is something more sinister at play?

With a frightening inner power growing inside him, Emiel’s time is limited. War lies ahead, predators dog his trail, and hideous monsters threaten his life. So be it. Emiel will destroy anything standing between himself and his daughters; even if it means embracing the very power he most fears.

Ramon Terrell is an actor and author who instantly fell in love with fantasy the day he opened R. A. Salvatore’s: The Crystal Shard. Years (and many devoured books) later he decided to put pen to paper for his first novel. After a bout with aching carpals, he decided to try the keyboard instead, and the words began to flow.

As an actor, he has appeared in the hit television shows Supernatural, izombie, Arrow, and Minority Report, as well as the hit comedy web series Single and Dating in Vancouver. He also appears as one of Robin Hood’s Merry Men in Once Upon a Time, as well as an Ark Guard on the hit TV show The 100. When not writing, or acting on set, he enjoys reading, video games, hiking, and long walks with his wife around Stanley Park in Vancouver BC.

Connect with him at:

You have subscribed to alerts for Ramon Terrell.

You have been added to Ramon Terrell's favorite list.

You can also sign-up to receive email notifications whenever Ramon Terrell releases a new book.