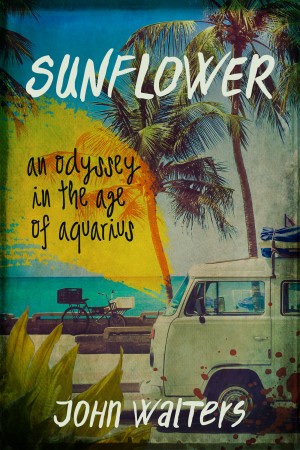 John Walters recently returned to the United States after thirty-five years abroad. He lives in Seattle, Washington. He attended the 1973 Clarion West science fiction writing workshop and is a member of Science Fiction Writers of America. He writes mainstream fiction, science fiction and fantasy, and memoirs of his wanderings around the world.

Reviews of Sunflower: A Novel by John Walters

California again, right after Altamont, billed as Woodstock West. Sunflower is Penny's new name, and part of her new identity. Hippy, as it's spelled here.
The novel cruises through its opening episodes with a sense of trying to play hopscotch, landing on all the right topics of the era – violence and nonviolence, racism, drug dealing and partying, sex with strangers, unwelcome sexual innuendo, the straight parents back home, 'Nam and its nightmares, campus protests, hitchhiking, abusive cops, a commune, idealism and cynicism – but much of the telling feels perfunctory with dialogue that's largely filled with dialectical and pedantic argument. The narration also gets tangled in shifting tenses, and the formatting itself goes wonky, alternating from one typeface to another and back.
But a third of the way into the book, the plot picks up speed and gains depth, especially when it gets to Greece (another of those unintentional recurring themes in my reading) and then leaps on to India.
I should note that in a typical hippie-era novel, an inevitable stream of references to rock songs and singers or bands appears as a kind of required in-text footnoting, and this tale is no exception.
In the end, though, this text becomes an astute critique of the outbreak rather than its celebration – concluding with a crucial decision in a high place, the Himalayas, in its air of clarity.

You have subscribed to alerts for John Walters.

You have been added to John Walters's favorite list.

You can also sign-up to receive email notifications whenever John Walters releases a new book.