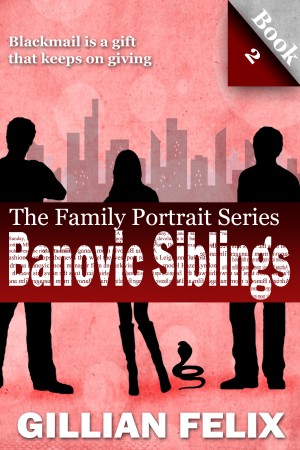 The Banovic Siblings learn that blackmail is a gift that keeps on giving. More
College boy Kevin Banovic’s casual affair with Savi DaCosta suited him perfectly. Things change when he finds out that Savi is his mom’s high school bestie. When Kevin tries to end their affair, Savi blackmails him. After Kevin rescues Savi’s stepdaughter, L’Wren, from her abusive boyfriend, he can’t stop thinking about her. He must find a way to handle Savi, protect L’Wren, and keep his sanity.

Bad girl Adriana Banovic is pleased with herself for getting her nemesis expelled from Westwood Academy. As feelings between her and her latest victim Haze Lyndon escalate, an unexpected rival discovers her secret and threatens to expose her. With emotions on the line, will her new rival beat her at her own game or end up another casualty of Adriana’s wrath?

Zax Banovic has it all. Tall and handsome, he’s an academic genius, with a killer smile and a heart of gold. When his best friend gets into trouble, he feels responsible and covers for him. But his best friend is not as honorable and has other plans for Zax.

The Banovic Siblings learn that blackmail is a gift that keeps on giving. This is the second book in the Family Portrait novel series.

If you like shows like the original Melrose Place, Beverly Hills 90210 and Nashville, where the guys and girls are hot and the schemes are hotter, you will like The Banovic Siblings.

Gillian Felix has been writing since she was old enough to hold a pencil. She enjoys creating characters that could be your next-door neighbor, but would you want them as your neighbor is another story.

Originally from the island republic of Trinidad and Tobago, Miss Felix moved to the United States in 1998. Since then she has been involved in the entertainment industry for over ten years. Her experience ranges from script supervisor to production manager on many independent features. She is trained in the Meisner and Stanislavski technique of acting, which she credits as an asset to her character development and writing.

Miss Felix is also an entrepreneur and advocate for children's and women's rights.

You have subscribed to alerts for Gillian Felix.

You have been added to Gillian Felix's favorite list.

You can also sign-up to receive email notifications whenever Gillian Felix releases a new book.