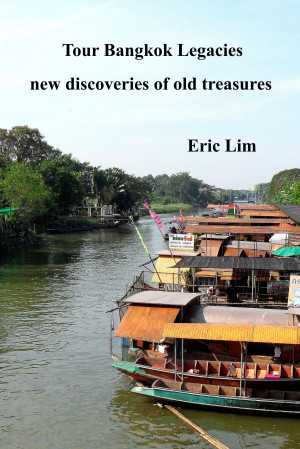 Visit old temples and shrines with beautiful murals or architecture, connections with a famous deity, personality or a ghostly legend. Admire the architecture of century-old churches that are a legacy of the early Christian missionaries.

Stroll through quaint museums set up by dedicated individuals determined to preserve the heritage of their art and way of life of their communities in days gone by. Marvel at the traditional craftsmen and women committed to preserve their craft for the sheer labor of love, not for fame or fortune but for posterity.

Discover off the beaten track places that you wouldn’t believe are in Bangkok; a coastal mangrove strip, an old canal where the old can still co-exist with the new, old communities that have reinvented themselves.

Explore the cultural treasures as you walk through the city at your own time and pace. Discard the stereotyped view and see a different side of the city in an enriching journey for the first and the every time you travel to Bangkok.
Available ebook formats: epub mobi pdf lrf pdb txt html
First 10% Sample: epub mobi (Kindle) lrf more Online Reader
pdb
Price: $9.99 USD
Buy Add to Library Give as a Gift
How gifting works
Create Widget
Tags: bangkok travel guide bangkok cultural guide bangkok eguide book bangkok maps bangkok walking guide tour bangkok legacies
About Eric Lim

Eric Lim has lived in Bangkok for more than a decade and it was this city that helped him rediscover his love for writing, history, culture, handicraft and the ways of life of old communities of which there is no shortage in Bangkok.

Bangkok has always aroused his curiosity and fascination long before he even set foot in the city. There was this strange attachment to a city even though it was so drastically different from Singapore where he grew up.

He continues his search for historical and cultural treasures in Bangkok and Thailand. These will be brought to you in his subsequent e-books in the series, "Journey through Thailand", which is about his historical and cultural journeys to the various provinces. His search continues for these old treasures, it would take a life time to see them all.

“Tour Bangkok Legacies : New Discoveries of Old Treasures” is the work of an author with a deep interest in the cultural history of one of the most fascinating cities of Asia which is also among the world’s top tourist destinations, Bangkok. For centuries the centre-stage of political, cultural and economic developments in Thailand, Bangkok (known to Thais as Krung Thep Maha Nakhon) dates its origins to the 15th Century as a trading post during the period of the Ayuthaya Kingdom. In publishing this book, Eric uncovers a treasure trove of gems of the Kingdom’s legacy. Through this exposition of Bangkok’s wats and temples, churches of the various Christian denominations, museums, markets, arts and crafts and the klongs or canals which have served a vital public transportation function in the traffic-congested capital, Eric has made available a wealth of information about the origins, history and even folklore surrounding fascinating edifices, monuments and customs. This work of passion and labour of love is an invaluable source of information for anyone with more than a fleeting interest in Bangkok’s cultural landscape and history.

Finding the Heart of Bangkok and Sharing It with Everyone

I’d lived for years in Bangkok and walked through many of its neighborhoods. I thought I knew the city, until I picked up Eric Lim’s Tour Bangkok Legacies. Now I’m reading as fast as I can, realizing how much new territory I have to explore in a city that has so much that I’ve yet to see.

Few people know Bangkok as well as Mr Lim does. He has learned to speak Thai fluently, has steeped himself in its history, and has made it his life’s work to cover every inch of Thailand’s capital city. Generously and skillfully, he has shared what he’s learned so far in a book that is informative and fun to read too.

From its birth out of the ashes of the sacked city of Ayutthaya through the turbulent centuries that followed, Mr. Lim chronicles the growth of a city he clearly loves, while tracking down surviving remnants of the history that has shaped it.

Beginning with the Chinese village that was displaced when Thailand’s king moved his seat of power to the banks of the Chao Phraya River, Mr. Lim takes us to its modern day site that is now Chinatown. This confusing and mesmerizing part of Bangkok isn’t just its oldest neighborhood—it is the one in which strangers are absolutely guaranteed to get lost. Fortunately, with this book travelers can find their way through the labyrinthine lanes or soi to find markets, temples, shrines, and food, as well as the history that is the underpinning of it all. Scrupulous directions lead the way, along with information that links this area to the present day. I’ve spent a lot of time in this area, but never under the guidance of Eric Lim. Soon, very soon…

Bangkok’s temples are dazzling, but the stories behind them and the murals within add a dimension that casual sightseers may miss. Mr. Lim provides the background and the knowledge that fleshes out the time spent in the city’s wats—and churches too, of which there are a surprising number, each one conveying a fascinating history.

Museums of all kinds abound in Bangkok, from the famous to the idiosyncratic. They’re as hidden as they are numerous, but with this book anybody can find the one that suits them best. Dolls? Stamps? Or a collection of Thai houses, each containing the tools and crafts of a bygone time?

Perhaps my favorite part is the section on contemporary Thai artists and craftsmen. Mr. Lim has found bamboo flute-makers, artists who create traditional Thai masks for classical performances, bronzesmiths, and a man who carves soap into flowers, fruit, and mythical creatures.

He ends with journeys to the farthest corners of the city he loves, going to Bangkok’s only seafront, an ancient market that now sells art, and the city’s newest floating market whose customer base contains few foreigners—or at least not until readers of this book arrive. The final adventure is a trip on a city canal that is still part of its past, another facet of Bangkok that I can’t wait to explore.

Bangkok often gets a bad rap from tourists who never get beyond the over-touted areas. With this guidebook in hand, travelers can discover the heart of one of Asia’s most entrancing cities—and residents can find places they never dreamed had existed.

You have subscribed to alerts for Eric Lim.

You have been added to Eric Lim's favorite list.

You can also sign-up to receive email notifications whenever Eric Lim releases a new book.