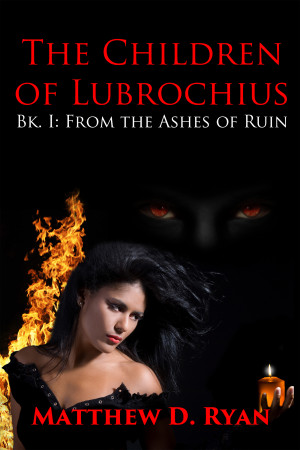 The Children of Lubrochius (Bk. I: From the Ashes of Ruin)

By Matthew D. Ryan
Rated 4.67/5 based on 3 reviews
Looking for a well-crafted, succulent fantasy read? Drasmyr introduced you to Coragan and his friends as they crossed paths with a powerful vampire. Now, they must deal with a cult of demon worshippers. It's a Sword and Sorcery thrill ride that consistently earns four to five stars. Don't miss out. Buy The Children of Lubrochius Now! More
Dead Men Sometimes … Move.

And when they do, prepare to face the unholy. For evil comes in many forms. In Drasmyr, Coragan and his comrades faced a vampire. Now they must deal with the Children of Lubrochius, a cult of evil demon worshippers. In these pages, their skills, their wits, and their brawn will be tested. This is no easy task, and much is at stake. The reader gets his fill of demons and vampires done right. Enjoy the taste of the timeless struggle with evil.

The Children of Lubrochius has consistently earned ratings in the 4-5 star range. Few books can match its action-packed engrossing story line. Don't miss out. These pages reverberate with mystery and adventure. Just like your gaming days of yesteryear. Buy The Children of Lubrochius now!
Available ebook formats: epub mobi pdf lrf pdb txt html
First 40% Sample: epub mobi (Kindle) lrf more Online Reader
pdb
Price: $5.99
Free! USD
Buy with coupon Use the code KB84D at checkout to get this book for free
(Offer good through March 15, 2025 )
Have a better coupon?
Add to cart, then apply your coupon
Add to Library Give as a Gift (using coupon)
Have a better coupon?
Add to cart for gifting, then apply your coupon
How gifting works
Create Widget
Tags: vampire adventure demon magic wizard sorcerer drasmyr lubrochius
About Matthew D. Ryan

So, if you like vampires or dragons, or are just into the fantasy genre in general, I'm your guy. Download one of my books now. I heartily recommend Drasmyr.

Also in Series: From the Ashes of Ruin

Reviews of The Children of Lubrochius (Bk. I: From the Ashes of Ruin) by Matthew D. Ryan

Matthew Ryan is a very engaging writer. His story is hard to put down with an excellent plot and detailed characters. It is very dark though and not for queasy stomachs. Though not saturated with it, the violence and gore does get very graphic. I thought that it bogged down in places due to overuse of italics. It also tended to be redundant with a lot of repetition. Despite that, I ploughed through to the end..

I was lucky to receive this book from Matthew Ryan in exchange for a fair review. He is a thorough writer. Like Drasmyr, this book is told from several points of view. This may cause some repetition but his writing is so enthralling you tend not to mind. Coragan, Galladrin, and Borak are hired by the Magicians once again to investigate. This time they are looking for a missing girl. We meet Gaelan, who is a very intriguing gentleman that has quite the internal argument going on. Korina is up to no good, and now we shall find out much more about her hidden adventures. We are left with several unfinished obstacles and I am definitely looking forward to reading the final book to see how this adventure ends.

Luxuriously descriptive always, The Children of Lubrochius brings the reader back to a smaller, more intimate world, where magic is still real, where wood and metal are still the materials that surround us, and where creatures, long dismissed as myth in our world, still hunt and kill men and women with abandon. The plot is richly detailed and as deep and dark as the nighttime sea. Elaborately interwoven characters become like friends and family, and you fear for them as you would your kin. I can't wait to read the rest of the series!

(reviewed 50 days after purchase)
Holly Irish reviewed on April 4, 2014
(no rating)
****ARC Review****
Oh holy wow! I don't even know how to describe this book to give it the credit it deserves. This book is dark, twisted, creepy, and full of action. I had to keep putting it down due to it being a bit dark. I couldn't even read it at night! The vampire is just creepy *shivers* I wouldn't want to cross paths with him or the main character. She's more creepy and twisted than he is! But I loved it! It's a great book filled with mages, a vampire, and other creatures! I'm glad that this is the first book to the series since I can't wait to read the other ones and give myself more nightmares! P.S. This is not a "sparkly, lovely" vampire book. It's dark and the vampire is EVIL!