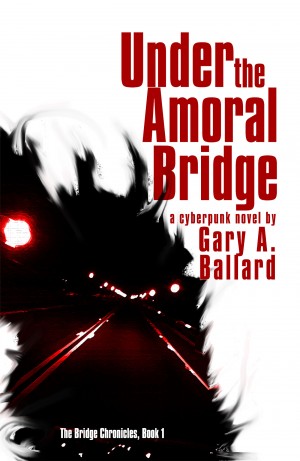 Under the Amoral Bridge

By Gary Ballard
Rated 3.67/5 based on 3 reviews
Artemis Bridge is the know-to, go-to guy, the amoral fixer in 2028 Los Angeles with the connection for your illicit desires. When an associate dies in his arms, he is burdened with a damaging video of the current mayor. With assassins dogging his every step, he has only days before the corrupt mayor is re-elected. This taut futuristic cyberpunk thriller is the debut novel by Gary A. Ballard.
Available ebook formats: epub mobi pdf rtf lrf pdb txt html
First 20% Sample: epub mobi (Kindle) lrf more Online Reader
pdb
Price: $0.99 USD
Buy Add to Library Give as a Gift
How gifting works
Create Widget
Tags: scifi mystery cybernetics speculative fiction future fiction cyberpunk fiction pulp series science fiction scifi serial comedy adventure humor action political thriller high tech near future tech
About Gary Ballard

Under the Amoral Bridge - Machinima Trailer
This trailer was created with The Movies, written by, starring and directed by Gary A. Ballard. The music was provided by Death in Logic.

The book was well written, dialog was sharp, and descriptions were pretty much on-point. Ballard doesn’t hit you over the head with pretty prose or pages upon pages of description. There’s nothing pretty in 2028 Los Angeles. His prose comes off sharp, the characters acerbic. Though the physical action was minimal, the pace was kept up throughout the novel as things go from bad to worse. There were only minor quarks that tweaked my inner-editor. A couple of grammar glitches or repetitious prose here and there. No overt spelling or other major issues that usually turn me off from self published works.

I was a little worried that I'd get lost in a book filled with technical jargon, but Mr. Ballard did a fantastic job of giving me enough information that I understood the premise without overwhelming me with techie speak. The fast, action packed plot kept me turning pages well into the night.

This is a solid, but not groundbreaking cyberpunk adventure. Gary doesn't tread too far off the genre's beaten path, and for most of the book the action and dialogue (though not the vocabulary; sed -e "s/cyberpunk/SomeGenre/g") could be set in any noir story from Renaissance Europe to the far distant future. It's a quick read, and it's full of likable characters.

It doesn't suffer from the drawbacks typical of episodically published stories. Each installment flows well into the next, with no unnecessary recaps or useless cliffhangers: thankfully, this book reads nothing like Charles Dickens. The denouement feels like it's tacked on; almost like Gary lit a neon sign on a drizzly evening that says, "Second Novel: Here!" with a huge flashing arrow to the only plot point he left unresolved.

I like slimy, narcissistic antiheroes and Amoral Bridge delivers. He's not a total douchebag, he operates by his own moral compass that's tuned to a darwinian inspired nihilism I found myself relating to:


This book is a great introduction to cyberpunk for people who might not usually read scifi, and for diehard cyberpunk fans it's a great way to spend a couple of nontaxing hours.

I read the smashwords edition, and it suffered from the usual deficiencies that all their epubs have, but was generally well rendered on my reader.