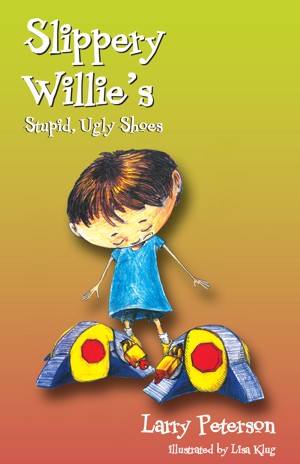 By Larry Peterson
A children's picture book that teaches how to build self-esteem by accepting differences. More
Willie Wiggles hates his slippery feet. He just slips, slides and spins all over the place. But what he hates even more are the special shoes that have been made for him that will help him to walk just like all the other kids. Willie thinks that they are the "stupidest, ugliest shoes in the whole world."

Larry is a Catholic/Christian blogger and posts commentary weekly. His work has appeared in such publications as Zenit from Rome, Aleteia, New Evangelists, Top Catholic Blogs, Big Pulpit, Catholic365.com and others. His first children's picture book, "Slippery Willie's Stupid, Ugly Shoes" was published in 2011. In 2012, his full length novel, "The Priest and the Peaches" was released. His latest novel, "The Demons of Abadon", began being published in Volume form (ebook format) in the fall of 2015. The complete novel (paperback and ebook) will be available in the spring of 2016.

Larry belongs to the Catholic Writer’s Guild, The Catholic Writer’s Society, The Knights of Columbus, and the St. Vincent de Paul Society. He has been an Extraordinary Minister of Holy Communion for over twenty years bringing communion to the homebound and hospitalized.

He lives in Pinellas Park, Florida and his kids and six grandchildren all live within three miles of each other. His first wife died of cancer in 2003. He remarried four years later and is now the primary caregiver for his wife, Martha, who has Non-Hodgins Lymphoma since 2011 and came down with Alzheimer's Disease in 2012.
The writer says, "God has me where he needs me and I try my best to make Him proud.

You can find more at www.larrypeterson-author.com

You have subscribed to alerts for Larry Peterson.

You have been added to Larry Peterson's favorite list.

You can also sign-up to receive email notifications whenever Larry Peterson releases a new book.