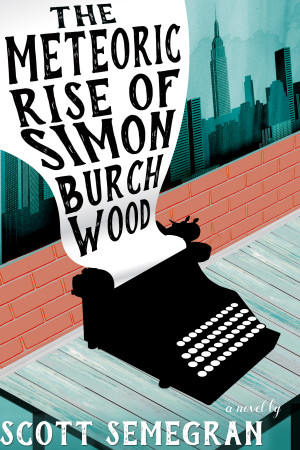 The Meteoric Rise of Simon Burchwood

Simon is certain he is on the brink of literary stardom. Yet this brief sojourn in Montgomery challenges his haughty façade—and the "meteoric rise" that has continually eluded him. Expecting adulation from his childhood friends during his layover in Montgomery, he's instead met with indifference. Ready to finally leave his troubled past behind and move on to greater things, he invites his friend Jason—whose marriage is on the verge of divorce—to join him in New York. They quickly embark on a bizarre trip that is stranger than they could have ever imagined.

"An ambitious, enjoyable read with a superb ending that changed my interpretation of the entire text." — IndieReader

"The book is told entirely from Simon's viewpoint. Simon is not a very likable guy; as a matter of fact, he is a self-centered, pompous jerk. But for some reason, it's pretty fun to be inside his head." — Red Adept Reviews (4.5 Stars)
Available ebook formats: epub
First 20% Sample: epub
Price: $0.99 USD
Buy Add to Library Give as a Gift
How gifting works
Create Widget
Tags: fiction literary humor montgomery funny writer new york semegran
About Scott Semegran

Scott Semegran is an award-winning writer of nine books. BlueInk Review described him best as “a gifted writer, with a wry sense of humor.” His latest novel, The Codger and the Sparrow (TCU Press, 2024), is a comical yet moving story about a 65-year old widower’s unlikely friendship with a 16-year old troublemaker. His previous novel, The Benevolent Lords of Sometimes Island, is about four middle school friends who sneak away to an abandoned lake house to evade the wrath of high school bullies, only to become stranded on the lake’s desolate island. It was the First Place Winner for Middle-Grade/Young Adult fiction in the 2021 Writer’s Digest Book Awards. His novel, To Squeeze a Prairie Dog, was the winner of three book awards including the 2020 IBPA Benjamin Franklin Award Gold Medal for Humor. Other books by Scott Semegran include Sammie & Budgie, BOYS, The Spectacular Simon Burchwood, The Meteoric Rise of Simon Burchwood, Modicum, and Mr. Grieves. He lives in Austin, Texas with his wife, four kids, two cats, and a dog. He graduated from the University of Texas at Austin with a degree in English.

About the Series: Simon Adventures

The Adventures of Simon Burchwood

Reviews of The Meteoric Rise of Simon Burchwood by Scott Semegran

This funny picaresque novel features the insight-challenged Simon Burchwood, off on a quest for fame and fortune as a great writer, making his journey from Texas to a reading of his début novel at the flagship Barnes and Noble store in New York City by way of Montgomery AL, where his boyhood friend Jason signs on as his Sancho Panza. Simon is a fine example of a “you spot it, you got it” personality type, exceedingly critical of everyone he meets, tilting at windmills that have his own name painted on them. Semegran manages a first-person narrative that is simultaneously derogatory, clueless, and energetic. Simon is constantly launching into little asides, some of which make one want to scream “TMI!” His meanderings will remind birders of the song of the house finch, which emits a long trail of descending, insistent-sounding notes, finishing with a querulous, whiny three-note ascending and descending phrase at the end; Simon's songs always end with the assertion “It's true!” He's a stingy tipper to boot; this is tolerated somewhat better in Montgomery than in NYC.
The action picks up substantially during his time in Montgomery, where he runs into old acquaintances and revives his assorted petty grudges against them that had been dormant for years, refreshing his relationships with people as what I think people nowadays call their “frenemy.” He disparages Jason's slovenly lifestyle and makes fun of his old car, calling it a “turd-on wheels.” The reader will tightly grip an imaginary steering wheel while Simon, often half in the bag, rides around the dark Alabama streets in Jason's other car, his father's lovingly restored 1967 Mustang.
As Simon readies for the New York leg of his trip, the cracks in Jason's marriage become visible to him, and, at Simon's insistence, Jason comes along for the ride, even though he has declared to Simon that “Everything was fine until you came into town. That's when everything started to fall apart.”
The New York segment is played for slightly more broad comedy, a two-hicks-in-the-big-city farce. The two men arrange with a sleazy bellman to stage a “practice” reading of Simon's book (always referred to in caps: “THE RISE AND FALL OF A TITAN,” based on the illegal shenanigans of Simon's detested boss), inviting off-duty hotel employees and sending up a keg. Simon clutches and manages to read the first paragraph only; then the drinking and partying begin. Our hero does manage a few moments of empathy, both in dealing with Jason and with a menacing breakfast chef. Does this suggest that, all other evidence aside, his book may be good? Is he capable of change, or will he remain a legend in his own mind?
The writing is very clever. The only problem I had was with Semegran's usage of “low and behold,” instead of “lo and behold,” and a few typos. Read this book, and feel yourself clutching the wheel of the Mustang as Simon careens through the streets and reaching for your wallet as he prepares to dole out another miserly tip.

(reviewed the day of purchase)
Davilynn Furlow reviewed on March 25, 2011

Why anyone would care about Simon Burchwood’s meteoric rise I’m not sure, but I certainly did. I couldn’t stop turning the pages to find out what amazing, stupid, or appalling thing Simon might do next. It’s true, as Simon, our narrator, says time after time in his memoir, The Meteoric Rise of Simon Burchwood.
Simon has always wanted to be a famous writer – not just a writer, but a famous one – yet fate has him working a dull job at TechForce, in Austin, Texas. Actually, he does as little for his employer as possible, preferring to use his company computer to work on his great novel, It’s true.
Simon is not an appealing man—not in appearance as he describes himself, not in his personality, and not in his behavior. Yet we are hooked on his adventures and what comes out of his mouth.
He is supposed to be flying to New York to read a passage from his soon-to-be-published novel, The Rise and Fall of a Titan, at Barnes & Noble’s flagship store, but he stops off in his hometown of Montgomery, Alabama, to visit his best friend, Jason, whom he hasn’t seen since he was 16. They have stayed in touch through, amazingly enough, letters.
Some of the best scenes in the book come when Simon interacts with strangers. He inevitably starts out thinking a person is nice, clever, a genius even, then ends up hating them—all in one short encounter.

As an example, here’s part of his encounter with an airport bartender:

Bartender: “That drink’s on the house," he said, pointing to my cocktail.

Simon: “Thank you for your generosity." Can you fucking believe it? Wow, he was a professional, a real topnotch bartender. I have known many bartenders in my time but he was one of the slickest.”

And later in the conversation:

Simon: "That's a shame. Writers should be like rock stars in our society. They should be revered," I said. And I meant it too.

Bartender: "That's funny. That's like saying everyone should recognize chess masters or cyclists or physicists or inventors. Nobody cares about writers just like nobody cares about those other types. No offense."

Simon: "None taken." Actually, that really pissed me off. I mean, who the fuck did he think he was anyway? I was the one with a publishing deal. He was stuck in an airport bar serving swill to his high-class clientele, the nose-picking barflies.”

And his encounters continue with his about-faces: the ticket agent, the flight attendant, a friend from high school, Jason’s wife, the girl he had a crush on in high school; not even Jason escapes his excoriation. It’s true.
And did I mention that he was cheap and a shameless self-promoter? For example, he passes out his business card to just about everyone he runs into and tells them: " . . . you can leave me a tip by going to my web site at www.simonburchwood.com and clicking the Submit button on the gratuity web page." He takes all major credit cards. It’s true.

Simon is such a character that I couldn’t wait to find what he did next.
But I wasn’t at all prepared for the surprising conclusion.
It’s true.

You have subscribed to Smashwords Alerts new release notifications for Scott Semegran.

You have been added to Scott Semegran's favorite list.

You can also sign-up to receive email notifications whenever Scott Semegran releases a new book.