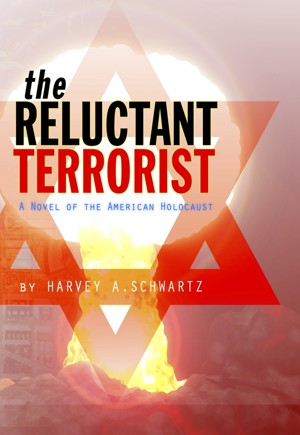 The Reluctant Terrorist, a Novel of the American Holocaust

By Harvey A. Schwartz
Adult

Could the Holocaust happen in America? A leading civil rights lawyer creates a fictional scenario in which American Jews are branded as terrorists, arrested and herded into detention camps. Would American Jews fail to resist, as German Jews did, or would "never again" mean "not now, not here?" This is a must read book offering a plausible depiction of American Jews' worst nightmare. More
Round up all the Jews. It happened in Germany, Spain, England, and France. Could it happen in America. An atomic bomb destroys Tel Aviv, severing Israel. Two ships carrying Jewish refugees limp into Boston harbor. As the ships are to be returned to the new nation of Palestine, Boston Jews free the refugees, killing ten Coast Guardsmen. Arrests of these new "enemy combatants" are met with marches and bombings as American Jews struggle to balance their loyalty to America with the realization that "never again" has become "not now, not here." The confrontation between America and her Jewish citizens escalates, driven, as with so many violent clashes, by forces seemingly beyond all parties' control. The author, a civil rights lawyer, paints a chilling picture of a future America in which leading citizens become enemy combatants subjected to detention, torture and worse. Could this happen in America? German Jews thought it could never happen to them, until it was too late.
Available ebook formats: epub mobi pdf rtf lrf pdb txt html
First 20% Sample: epub mobi (Kindle) lrf more Online Reader
pdb
Price: $1.99 USD
Buy Add to Library Give as a Gift
How gifting works
Create Widget
Tags: legal jewish civil liberties politcal

You have subscribed to alerts for Harvey A. Schwartz.

You have been added to Harvey A. Schwartz's favorite list.

You can also sign-up to receive email notifications whenever Harvey A. Schwartz releases a new book.