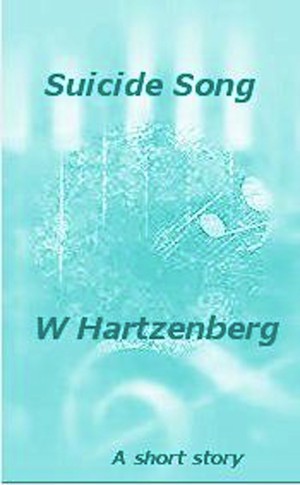 By Wanda Hartzenberg
Rated 4.67/5 based on 6 reviews
A third-year law student struggles to ensure his death is as existential as he can make it but the Womburu won't let him. His parting marked with a song leaves tragedy in its wake. Maybe he knew something none of us do.
Download: epub mobi (Kindle) pdf more Online Reader
rtf lrf pdb txt
Price: Free! USD
Add to Library
Create Widget
Tags: music existential despair suicide song

Though stylistically modern, this short piece has a poetic hum similar to Edger Allen Poe's work, hinting at a classical feel. Who can argue that he is not one of the greatest writers of all time? And to be mentioned in the same contextual resonance, shows the skill of the author.

Wanda Hartzenberg's, 'Suicide Song' plays out with a resounding ring.

This is a very poignant short story, which deals with an unsettling and upsetting topic, and follows a young man who meticulously plans and executes his suicide. It is based on a true event.

This story was very touching and left me feeling a little emotional, as I have known people who have taken their lives in the belief that they are worthless, and the world would be a better place without them. This is not true. Every person on this planet has a worth - self worth. But due to bullying, self loathing, low self esteem and/or depression (either due to emotional or financial issues), many people falsely believe that no one cares whether they live or die.
I was devastated when I found out that the two people I considered friends ended their lives. I wished I had known that they were in a dark place. Unfortunately, I had not, and so was unable to help them. My one question will always remain as "Why?". Taking one's own life is never a solution to a problem. It just creates bigger problems for the family and friends who are left devastated, and wondering if they could have helped in some way.

If you, or someone you know, has been bullied, hates yourself/themselves or suffers from depression and has contemplated ending it all, I would seriously recommend seeking help. There are several organisations and charity groups, not to mention family members or friends, who would be willing to listen, even if they cannot completely understand what you/they are going through.

Although this story is based on a true event, Wanda Hartzenberg has written a deeply philosophical take on the subject of suicide. I found her writing to be very descriptive and almost lyrical in it's presentation. Her story, though short (only 5 pages long), sure packs a rather large emotional punch, and, with the inclusion of lyrics from Neil Diamond's song "Hello Again" made me picture the scenes with chilling clarity. This is her debut story in the writing world, and I am looking forward to following her career with interest.

I highly recommend this story to everyone. - Lynn Worton

This is a dark story; short in length, deep in subtext. In fact, the only illumination in the tale arrives in the afterword.

With that preface, the story is not the type I like, nor did I care for this tale...but I liked it, nonetheless, and in that paradox lies its fascination.

A tale this short leaves little to discuss, since any revelation effectively explains the whole tale and I prefer to let the reader have that pleasure.

What I can discuss is the evocative imagery the writing creates and the effectiveness that it gives the darkness described within. It is utterly convincing and thus starkly disturbing.

At one point, I was confused with a shift in narrative. The author made herself accessible and her explanation was not what I had imagined. I take this for a good thing, as I feel the reader's inalienable "right" is to interpret the story as their own imagination sees fit.

I did not like this story. But I liked this story. And within that paradox is why I am glad I read it.

"Suicide Song (Songs)" by Wand Hartzenberg is a most beautiful and thoughtful short story about a young man's last moments on earth. The author zooms in from afar with mesmerizing observations about the night sky and a dark memory before homing in on that moment, throughout using great metaphores and scene setting.
The writing is atmospheric and bittersweet while the setting is described in excellent detail. It is the perfect close up of the surrounding of th emoment to come. The scene was so captivating I felt as if it were me in that room.
The afterword is almost as important and breath taking as the story itself when the author explains about her connection to the man. This truly touched me deeply.

I found this to be both ultimately the saddest story, and a most touching tribute and memorial to a young man who briefly touched the authors life. The loss of a life, especially one taken by the person living that life affects everyone, regardless of how peripheral someone is to the person who has died. When that person leaves no note offering any insight for survivors to grasp onto, the tragedy is even greater.

We all work through this type of loss in our own individual ways. This story doubly impacted me as my son (eighteen at the time) was one of two people who found a another friend (also eighteen) after his own suicide a few short weeks after graduating from high school. I had no answers, nothing to offer my child except his mother's love to ease the horrific memory of finding his friend.

The author eloquently pieced together details of a young man's final hours. Her afterward offers a heartfelt tribute that comes through most clearly. I have no doubt of the author's caring heart and spirit as I read her words, words that struck deep inside my own heart to pain that I had buried. I am quite certain this was not an easy story to write, any more than I found it an easy one to read. It is however, very well written. A story of nine brief pages that anyone who has lost someone to suicide should read. Yes, it will probably hurt as it brings back those painful memories. But it also may offer a bit of healing as you take in her words to say good-byes you yourself may have been unable to give at the time of your loss.

I was gifted a copy of this book in exchange for an honest review.

Wow, as a former school/crisis social worker I could not save everyone no matter how hard I tried. I would be lying if I said I did.
Cool book cover, great font & writing style. A very well written informative short story (book) true/false on suicide. It was very easy to read/follow from start/finish & never a dull moment. No grammar errors, repetitive or out of line sequence sentences. Lots of exciting scenarios, with several twists/turns & a great set of unique characters to keep track of. This could make a great movie, documentary mini TV series or a PP presentation. No doubt in my mind a very easy rating of 5 stars for this short story (book).
Thank you for the free short story (book)
Tony Parsons MSW (Washburn)

You have subscribed to alerts for Wanda Hartzenberg.

You have been added to Wanda Hartzenberg's favorite list.

You can also sign-up to receive email notifications whenever Wanda Hartzenberg releases a new book.