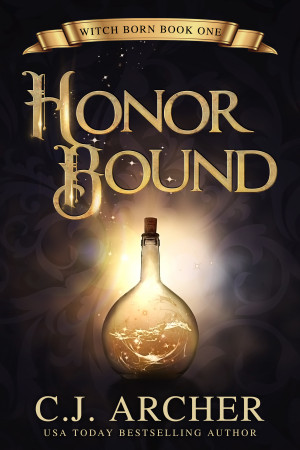 This story was quick to grab my interest, and I remained enraptured as it unfolded page after page. I thought it was uncommonly well conceived and beautifully constructed. ~ Coffee Time Romance & More. 5 "cups"

I could not put down Honor Bound. ~ Once Upon A Chapter reviews. Rated A (a keeper).

Isabel's quiet life as an assistant to one of London's famous apothecaries hides a deadly secret. A secret that could see her put on trial for witchcraft if the authorities uncover the truth. But when the authority figure who turns up at her shop is Sir Nicholas Merritt, she's at risk of losing more than her life. She could lose her heart and soul, and the man she loves.

Royal spy Sir Nicholas Merritt can't believe his luck when he stumbles upon Isabel during an investigation. He's been searching for her for seven long years and now he has her again, in his bed and his life. Except she's resisting all the way. Worse still, she's somehow tangled up with a plot to assassinate the queen. To hold onto her this time, he must find out why she left him while hiding a secret of his own that could tear them apart forever.

NOTE: This ebook is included in a 2-book bundle with the sequel, Kiss Of Ash. You can purchase the 2-book "boxed set" of the Witchblade Chronicles at a cheaper price than buying the ebooks individually.

A NOTE FROM THE AUTHOR:

If you've read my book REDEMPTION, you may notice the similarities between Tilda, the heroine in REDEMPTION, and Isabel, the heroine in HONOR BOUND. They both have the same supernatural powers—telekinesis, healing, pyrokinesis and finding things with a talisman. This is entirely intentional and stems from my fascination with paranormal phenomena. Stories about people with these "abilities" have been around for centuries and I've often wondered if there's any truth in them.
There are other similarities between these books - a strong heroine and a sexy hero whose outward persona masks deep pain. It made them a challenge to write, but very rewarding too. I hope you agree!
~CJ
Available ebook formats: epub
Price: $3.99 USD
Buy Add to Library Give as a Gift
How gifting works
Create Widget
Tags: romance paranormal romance spies witches historical romance elizabethan england romance adventure elizabethan romance tudor romance apothecaries
About C.J. Archer

C.J. Archer is the USA Today bestselling author of over 50 historical fantasy and historical mystery novels as well as historical romances set in Elizabethan England.

C.J. has loved history and books for as long as she can remember and feels fortunate that she found a way to combine the two. She has at various times worked as a librarian, IT support person and technical writer but in her heart has always been a fiction writer. She lives in Melbourne, Australia, with her husband, 2 children and Coco the black and white cat.

About the Series: Witch Born

Great storyline and hard to put down once started. For those of us who wouldn't normally consider a novel based in Elizabethan historical times, don't be discouraged because it is fantastically well written.

I could not put down Honor Bound. Isabel is a strong woman in a time where men ran the world and all those in it. She doesn't get on your nerves though. She is a smart woman who has supported herself for the past six years. Isabel's decisions are made based on those around her and never for herself. She's a kind and thoughtful soul. She helps the working girls that no one else would bother with.

Nicholas has looked for Isabel for the past six years. He never gave up hope and he didn't seek the annulment that his mother kept trying to pressure him into. Nicholas hoped and prayed that one day he'd find Isabel. He just never imagined that it would play out with his investigation into treason and attempted murder.

The secondary characters were also awesome, for lack of a better word. They were there to support the main couple but never overshadowed them at any point. Ash, Meg and Old Man Shawe wormed their way into my heart with very limited page space. Particularly Shawe.

The mystery was good. I didn't figure out who the baddie was but I have to think that it's because the chemistry between the hero and heroine took up most of my attention. Isabel and Nick don't have to be introduced to each other. They have a history. It's fascinating to watch them work through it and realize how much they mean to each other. It's also nice to watch them work together to try and find the bad guy. Nick also treats Isabel with respect even after all they've been through.

The only issue that I encountered is at the end of the book I kept thinking that I was hitting the happily ever after and this was going to be IT. Each time though, there was another issue that popped up only to be taken care of within the next page or two. This is very minor compared to the story that awaits the reader. For $2.99 you shouldn't hesitate to read this book. I'm very much looking to the second in the series. Ash grabbed my attention in the first book and I am very eager to meet the woman who will be his match!

At heart, this is a romance but with action and paranormal elements in a historical setting. Moves well, good characters. It says that it is the first in a series; the end does not hint at the next book. Fun read.

You have subscribed to alerts for C.J. Archer.

You have been added to C.J. Archer's favorite list.

You can also sign-up to receive email notifications whenever C.J. Archer releases a new book.