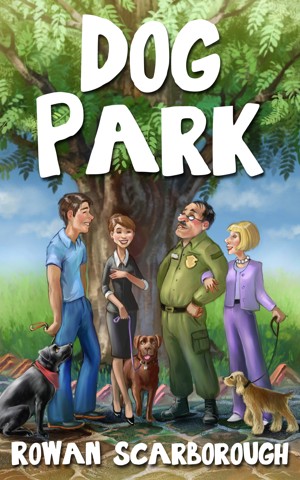 By Rowan Scarborough
Rated 5.00/5 based on 2 reviews
When it comes to dogs, Robert Benjamin is insanely good-hearted. His therapist wants fame and fortune. The Rexville dog catcher is hunting a nighttime scofflaw. His girlfriend accuses the wrong man. The mayor is up to no good. It all culminates in the annual Rexville Dog Show. Westminster, it is not. But the ending is so good it makes the nightly news. More
“Dog Park” has two love affairs, two mysteries, a political protest and lots of laughs. It is a humorous tale about the small town of Rexville, its wacky, but good-hearted, citizens and its prized _ you guessed it _ dog park. Robert Benjamin is a stay-at-home accountant who realizes his life is in shambles because he loves dogs too much. His therapist, Jen Giolito, views Robert as her ticket to psychological stardom. Andy Kershaw has ambitions too. He sees his job as top dog catcher as his last chance to join human law enforcement _ if he can just catch the person who is not curbing his dog. Gladys Ridgeway runs a dog salon, and she thinks she runs the dog park. Her intrusiveness gets Robert into a lot of trouble with town police chief Neal Zook. Robert turns for help to other dog owners who gumshoe their way through the internet to solve the case. The wackiness all culminates in Rexville’s annual dog show. Westminster, it is not. But it does attract media personalties and a big-city TV reporter, who tells her anchor, “All the good stories happen in small towns like Rexville.”

I cover the military in Washington, along the way publishing two nonfiction books, one on Donald Rumsfeld, the other on the CIA. Six years ago last April, I drove from a park in Virginia to my home in Maryland with a rescued black Labrador retriever. I named him Jet, not for fur color, but for the way he leaped into my arms once his foster mom opened the crate. "He sprung like a jet catapulted from an aircraft carrier," I said.

They really do pick us. He quickly exposed me to an entirely new culture: the dog park and the eccentrics who come. After I observed the people and mutts over the years, I began outlining plot lines for a funny story that would try to capture our obsession with man's best friend. I created a neurotic accountant, his ambitious therapist, an overzealous dog catcher and the woman who pulls his strings.

Only one character in "Dog Park" is based on some one in real life. That would be Jet. He has sent me on a journey not just to dog parks, but also to nature trails, the urban jungle, new friendships and — happiness.

“I just finished Dog Park. What a fun read. I’m a dog owner. I’ve met so many of these characters. Goofy but lovable.”

If you like dogs or you enjoy detective fiction then you are sure to enjoy this fun read. Lots of laughs with unique characters that will keep you turning the pages to find out what happens next.

You have subscribed to alerts for Rowan Scarborough.

You have been added to Rowan Scarborough's favorite list.

You can also sign-up to receive email notifications whenever Rowan Scarborough releases a new book.