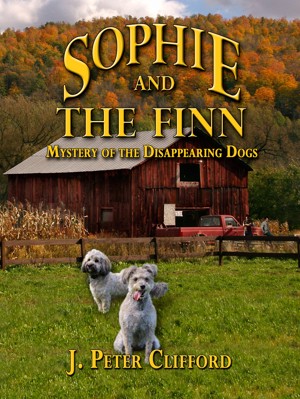 Sophie and The Finn: Mystery of the Disappearing Dogs

By J Peter Clifford
Erica Stafford gets thrown into a mystery, but it could place her and her pups in imminent danger. She is torn between solving the mystery and turning her head as if it never happened. With Sophie and The Finn at her side she decides that she must see it to the end no matter the risk. Erica has also discovered that something strange is happening to her that she can’t explain or understand. More
Erica Stafford has just entered the sixth grade in Vermont after the family moved there from New Jersey just two years earlier.

She leaves behind her old friends and is forced to make new ones in her new home. Fortunately she meets Abigail Adrianna Post or Abby, who becomes her very best friend. Abby’s dog, Sandy, joins Sophie and The Finn and they form a bond that leads them on a number of adventures together.

Then one day, by chance, Erica gets thrown into a mystery that she just can’t let go of, but it could place her and her pups in imminent danger. She is torn between solving the mystery and turning her head as if it never happened. With Sophie and The Finn at her side she decides that she must see it to the end no matter the risk.

Erica has also recently discovered that something strange is happening to her that she can’t explain or understand. Is it something that she can control or does it only occur randomly without warning and what does it all mean?

She and her two constant companions, Sophie and The Finn embark on an adventure that will begin with a discovery, but as they unravel the clues will eventually lead them into a dangerous encounter that places everyone at great danger.

“Unfortunately she never heard Sophie’s warning because of all of the noise coming from inside the factory building.

The next thing she felt was a pair of large strong hands pinning her arms together. She struggled to try and free them, but it seemed like the more she squirmed, the tighter the grip became. It was as if she was caught in a vise. Next, she felt her feet being lifted off the ground, “Oh my God, she thought to herself, I’ve lost complete control of my body.” It felt like a giant had picked her up like she was a helpless doll. It all happened so fast, she didn’t know how to react. She thought, “What’s happening to me, I can’t even make a sound?” Finally she started to scream, but the odd thing was that there was no sound coming out of her mouth. Her legs were kicking out at this giant, but he was way too strong. To him it must have felt like nothing more than a mosquito attacking his tree trunk legs.”

It is a story of a young inquisitive girl and her two dogs that have built this incredible bond together and a sense of adventure that leads them into the Mystery of the Disappearing Dogs.

Peter Clifford currently lives in New Jersey where he has spent most of his life, attending primary and secondary schools in and around the northern NJ area.

He earned a Bachelor of Arts degree in English from St. Francis College in Pennsylvania, which was followed by a three year tour in the United States Marine Corps as an officer.

He is married to his wife, Carol, a 5th grade teacher, whom he met on a blind date, and has three children, Erica, Stephen, and Matthew. Growing up, the family spent many happy summers in Vermont both as a child and later as a parent.

After a successful business career in both operations and human resources, where he further developed his writing skills, he has returned to pursue his lifelong passion---writing.

The inspiration and subject of his books come from his daughter’s two dogs Sophie and Finn, who have been a constant source of enjoyment and companionship. He also draws on his lifetime of personal experiences to inject details and information into the plot of his stories to provide the reader with a sense of anticipation and participation.

In his spare time he enjoys traveling, fly fishing, and spending time with his expanding family. 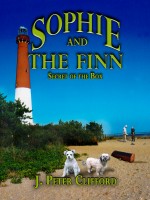 Reviews of Sophie and The Finn: Mystery of the Disappearing Dogs by J Peter Clifford

You have subscribed to alerts for J Peter Clifford.

You have been added to J Peter Clifford's favorite list.

You can also sign-up to receive email notifications whenever J Peter Clifford releases a new book.