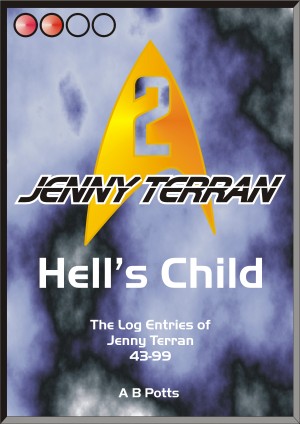 Assigned to the 'Professional Development Program', Jenny arrives at the Academy for her first term. With new friends and foes to contend with, Jenny must rise above everything that is thrown at her to prove that she is not the misfit she is maligned to be.

Then she on to her first mission aboard the ill-fated USS Earhart. The assignment: to find out what happened to the former crew of the Earhart and so many other ships that have disappeared in the aptly nicknamed, Bermuda Zone. It is not long however, before Jenny realises that she has a link to this place ... that she is the key to unravelling the mystery.
Available ebook formats: epub mobi lrf pdb html
First 20% Sample: epub mobi (Kindle) lrf more Online Reader
pdb
Price: $0.99 USD
Buy Add to Library Give as a Gift
How gifting works
Create Widget
Tags: enterprise star trek voyager jenny terran starfleet
About A B Potts

Guilty as charged. I spent most of my childhood daydreaming in worlds inspired by the likes of Jules Verne, Gene Roddenberry and Ian Fleming. Further fuelled by TV programmes such as Doctor Who, The Professionals, The Man from UNCLE and Tomorrow’s World, it is only to be expected that my stories should be imaginative and futuristic with a hint of humour.

At school, whilst others were listening to and absorbing the cold, hard facts of the French Revolution, I was running amuck through the streets of France with the Scarlet Pimpernel saving the Dauphin from the evil clutches of ‘Les Citoyens’. Nowadays, I have a very dull job as a bookkeeper so I continue to daydream of intergalactic fire fights and car chases though the Stelvio Pass with various baddies attempting to machine gun me into oblivion...

... and so you see, I'm off on my travels again. It really is that easy for me to be transported to these other worlds. Places I now want to share with others. I just hope you get as much enjoyment from my stories as I have.

Learn more about A B Potts

Jenny Terran's first term at Starfleet Academy has begun. She clears the air with her nemesis Rutter (assigned as her mentor in the first novel as a punishment for both of them), and settles in to her studies.

Her path is not all smooth sailing (or starship piloting) as egged on by her crazy inner voice, she challenges an 8 foot tall Klingon warrior to a fight.

Aboard the Earhart (the spaceship version of the Marie Celeste), Jenny ends up in another dimension, helping to fight for the freedom of an idyllic planet inaptly called Hell.

This book clears up part of the mystery of how baby Jenny ended up on an abandoned spacecraft.

Enjoyable, well written fan-fiction read for anyone who avidly watched any of the Star Trek series.

You have subscribed to alerts for A B Potts.

You have been added to A B Potts's favorite list.

You can also sign-up to receive email notifications whenever A B Potts releases a new book.