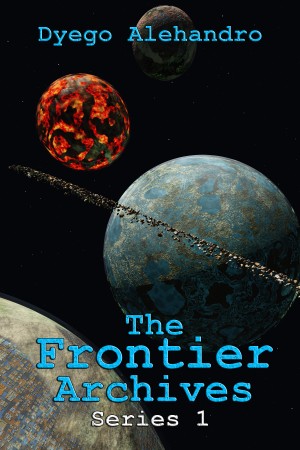 Dyego Alehandro is an author who has been writing since a very young age. He enjoys creating his own cover art and has received many accolades for his work. He is currently working on the epic Science Fiction series Avarice Dynasty. His hobbies include playing Legos, board games and PC games with his wife. He lives in Phoenix AZ and really needs to move somewhere that has rain.

A collection of four short stories that take place on some frontier worlds outside the Empire's control. It is billed as a dystopian place, but it's not as bad as most. The first story is about a smuggler who falls in love with a cargo merchant who wasn't what she seemed. The second story is about a gambler trying to get revenge on another gambler who drove his father to suicide. The third is about a gang of pickpockets and con artists trying to bring down a provincial governor. This has a similar plot structure to the first. The fourth is about space EMT's. Not bad for a short story collection, good twists, good world building and character building in such a short space.

You have subscribed to Smashwords Alerts new release notifications for Dyego Alehandro.

You can also sign-up to receive email notifications whenever Dyego Alehandro releases a new book.