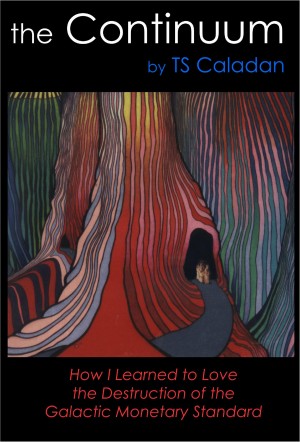 By TS Caladan
Caladrian Trask, a henchman for the evil Sardon Chancellery, is given a chance for redemption when Zog, the Cosmic Creator, offers him the opportunity to return in the future as the ‘Savior’ of a galaxy plagued by war and greed. More
In an alternate Continuum, a parallel galaxy suffers under the influence of Sardon’s Chancellery and its evil creation, The Galactic Monetary Standard (‘dylars’). Desire for these ‘dylars’ drives Citizens into countless wars, forbidden atomic weapons, and even the battle of the sexes. Chaos abounds as fortunes of both Royalty and yahoos are siphoned into Sardon’s Black Hole. Zog, the Cosmic Creator, gives hope to those who have none. A ‘Savior’ returns. The Neo Zog has a plan for peace...the destruction of the Galactic Reserve, making ‘dylars’ worthless. Citizens are up in arms. Neo Zog is wanted as an Outlaw. What happens next will be determined by a ‘winner takes all’ game of Tonk between good and evil, leaving ‘chance’ to decide the fate of a Universe.
Available ebook formats: epub mobi pdf lrf pdb txt html
First 20% Sample: epub mobi (Kindle) lrf more Online Reader
pdb
Price: $4.99 USD
Buy Add to Library Give as a Gift
How gifting works
Create Widget
Tags: money devil alternate universe alternate history savior atomic wars
About TS Caladan

Tray Caladan was born Doug Yurchey in Pittsburgh in 1951. An only child, he retreated into his imagination and drew fantastic pictures. Later, he drew backgrounds for “The Simpsons” and earned a tennis scholarship to Edinboro State as an art major. Afterwards he started the ‘Art Trek’ gallery in Pittsburgh. There he met a psychic (Katrina) who forever changed his life. Her insights sent him on a course to solve great mysteries. Nikola Tesla’s observations helped him solve riddles of Atlantis and ancient pyramids. His articles, videos, radio shows, theories, patent, games, and writings have earned him international acclaim throughout 40 years of researching natural and alien phenomena. His positive message of a ‘New Human Genesis’ pervades his science-fiction and his art, as well. Tray lives in Northridge, California, on sometimes shaky ground, with his cat (Monkie) and a large library of UFO and science books.

The Continuum
Caladrian Trask, a henchman for the evil Sardon Chancellery, is given a chance for redemption when Zog, the Cosmic Creator, offers him the opportunity to return in the future as the ‘Savior’ of a galaxy plagued by war and greed.

Reviews of The Continuum by TS Caladan

You have subscribed to Smashwords Alerts new release notifications for TS Caladan.

You have been added to TS Caladan's favorite list.

You can also sign-up to receive email notifications whenever TS Caladan releases a new book.