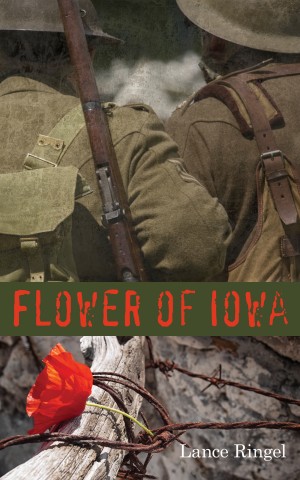 By Lance Ringel
Rated 4.75/5 based on 4 reviews
Flower of Iowa takes place against the turbulent backdrop of 1918 France. During the final months of World War I, young American Tommy Flowers must navigate the challenges of life in the trenches and his unexpected attraction to British soldier David Pearson. "Accomplished, touching historical fiction" with "a remarkable amount of flavor and detail" and "a compelling love story" - Kirkus Reviews More
In the tradition of historical novels about the epic war that tore Europe in half, Lance Ringe's Flower of Iowa is a sprawling tale of battle, courage, the resilience of the human spirit and the transformative power of love. This unforgettable book has been described by Kirkus Reviews as "accomplished, touching historical fiction" that "packs a remarkable amount of flavor and detail" and provides "a compelling love story." Stephen Fry called it "... a truly wonderful WW1 novel. A gay romance, but not sappy or silly. So truthful and touching."
Flower of Iowa recalls Hemingway’s A Farewell to Arms, if that classic tale of love and war had featured two men at the bruised heart of the story. Taking place in France during the final months of the bloody war in 1918, Flower of Iowa focuses on American soldier Tommy Flowers. As the naïve young man struggles to learn how to be a good soldier, he becomes attracted to Nicole Lacroix, a young French barmaid. However, Flowers finds himself in a rivalry for her affections with his brash Australian lieutenant, Jamie Colbeck.
At the same time, Tommy befriends British soldier David Pearson – a friendship that soon develops an unexpected intimacy. Baffled by their feelings, but committed to exploring them further, Tommy and David do everything to spend time together, even after David is wounded and sent home to England to convalesce. When Tommy and David are parted again by the war, a compassionate nurse, Sister Jean Anderson, generously devises a scheme by which she will secretly shuttle love letters between the pair until they can reunite.
Equally tragic and hopeful, dramatically stirring and historically faithful, Flower of Iowa takes its place among the memorable novels about the Great War, distinguishing itself with a gallery of compelling characters, meticulous research and exhilarating storytelling that vividly captures the war that changed the world forever.
Flower of Iowa is the first published novel by veteran journalist and writer Lance Ringel. Long fascinated with The Great War, Ringel first began work on the book in 1992 at the height of the controversy surrounding President Bill Clinton’s campaign promise to repeal “Don’t Ask, Don’t Tell.” Ringel envisioned a saga that examined a relationship between two soldiers set against the backdrop of WWI. This idea launched him into a five-year journey across America and through Europe in a quest to make sure that Flower of Iowa was as historically accurate as possible. Ringel visited former battlefields across the French countryside and their surrounding towns, as well as numerous museums and libraries in Europe and the United States.
While the first draft of Flower of Iowa was completed in 1997, Ringel continued to make periodic revisions of the manuscript over the past 17 years. However, as the centenary of World War I drew near, the author decided it was the perfect time to share his book with the huge audience of WWI enthusiasts in America and around the world.

A journalist and writer for four decades, Lance Ringel has penned five novels and three plays. At Vassar College, where he has worked for 14 years, he served as principal writer for Vassar Voices, a staged reading honoring the college’s sesquicentennial. It debuted at Lincoln Center, starring Meryl Streep, Lisa Kudrow and Frances Sternhagen and subsequently toured America and London. Ringel also wrote the narrative for At Home in the World, a music-and-words collaboration directed by John Caird that recently played across Japan. Ringel has had an impressive career in politics as well, serving as Assistant Commissioner of Human Rights under New York Governor Mario Cuomo. A native of central Illinois, Ringel currently resides in Poughkeepsie, New York, with his spouse of 37 years, actor-composer Chuck Muckle. Flower of Iowa is his first published work.

Lance Ringel, in "Flower of Iowa," somehow found a way to combine tenderness, uncertainty, and authentic characters in the oddest of places - the very real towns and battlegrounds of World War I France. The beauty of the love Tommy and Davey share floats above the uncertainties and evils of war and the social traditions of the times. Like most of humanity, these amazing characters' lives twist and turn, often in miraculous ways with each other and with the many intertwined characters that populate their world - Jamie, Nicole, and so many others. If you are searching for a tender love story that blends honest history, sparkling dialogue, and a powerful ending that brings tears of both joy and sadness, you have no choice but to read "Flower of Iowa."

From the first line, "Hey Tommy!", this novel is engrossing.
The two main characters are engaging young soldiers and the drama is in the contrast between their "innocence" and the horrors of the war . There are other excellently drawn characters. The author has a very thorough knowledge of the Western Front, so that the reader comes to actually identify with the soldiers and their experiences. The dialogue is crisp , the maps very helpful: overall , a terrific novel.

Flower of Iowa is a remarkable love story set in WWI. The book is incredibly rich in detail and expertly researched. I knew very little about WWI and was caught up in the drama...not only the love story of Tommy and David, but the horrors of trench warfare, and the political dramas of the allies fighting on the front and the devastation the great war left on the entire world.

Flower of Iowa is a sweeping epic that not only explores the American entrance to WWI, but is a daringly romantic tale of heroes, loss and friendship that grabs the reader in a deep place. The main characters, Tommy and Davey, came to life and made me pull for them from the start. The book is peopled with amazing characters that mostly seem believable and cause you to love or despise them. Jaime, who could have his own book, is the mentor and friend we all need, for example. The war scenes seem accurate and dangerous, but the danger does not transfer enough over to the love story between two men during a non "enlightened" time as it should. I feared them being caught but that was based on my own knowledge of the time. The novel was enjoyable overall but had some flaws. I felt the frequent usage of French became overwhelming and detracted. I know the author was going for authentic, but it could have been scaled back. I also think usage of nicknames in the narrative could have been limited more, as it felt unnecessary as the nicknames were perfectly placed in dialogue. It's also very long. That being said, I am still reeling from the ending. Although it is similar to the Absolutist in that it has a gay WWI romance, it stands alone and is distinct and quite enjoyable. Read this book if you love an epic love story, want to learn about the Great War's impact on lives, or want to be swept away to another place in time.

You have subscribed to alerts for Lance Ringel.

You have been added to Lance Ringel's favorite list.

You can also sign-up to receive email notifications whenever Lance Ringel releases a new book.