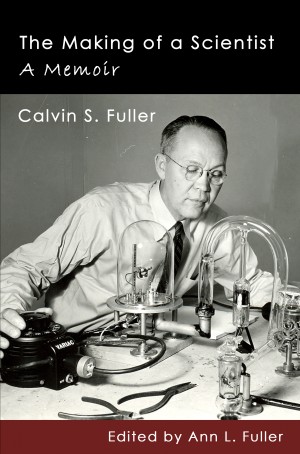 The Making of a Scientist: A Memoir

Dr. Fuller’s achievement is all the more remarkable because he grew up in a family beset with financial instability. The Making of a Scientist is, above all, an inspiring story of making it in America.
Download: epub mobi (Kindle) pdf more Online Reader
rtf lrf pdb txt
Price: Free! USD
Add to Library
Create Widget
Tags: solar cell history of science bell labs calvin s fuller history of technology
About Calvin Fuller

Calvin Souther Fuller (May 25, 1902 – October 28, 1994) was a physical chemist at AT&T Bell Laboratories where he worked for 37 years from 1930 to 1967. Fuller was part of a team in basic research that found answers to physical challenges. He helped develop synthetic rubber during World War II, he was involved in early experiments of zone melting, he is credited with devising the method of transistor production yielding diffusion transistors, he produced some of the first solar cells with high efficiency, and he researched polymers and their applications.

Reviews of The Making of a Scientist: A Memoir by Calvin Fuller

You have subscribed to alerts for Calvin Fuller.

You have been added to Calvin Fuller's favorite list.

You can also sign-up to receive email notifications whenever Calvin Fuller releases a new book.