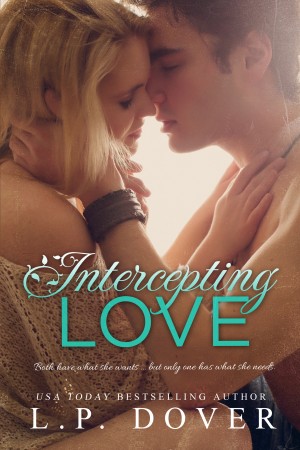 Two guys. One girl. One choice.
Having two men fighting for your attention is one thing, but choosing between them is another. One is a sexy football player with demons to face while the other is a motocross racer with a playboy past full of women. Both men want to change and both of them want her. The only thing standing in her way is herself ... and someone else who's determined to destroy her. More
**A steamy, romantic suspense novel by USA TODAY Bestselling author, L.P. Dover. If you love strong and sexy football players then this book is definitely for you.**

Both have what she wants … but only one has what she needs.

Working with professional athletes and helping them recover from their injuries has always been Kate Townsend’s dream, but after an accident left her scarred and heartbroken years ago she refuses to let what happened in her past happen again. Staying focused is the key, as well as not letting her feelings interfere with her job … no matter the circumstances. All of that is easier said than done when not only one, but two men crave her healing touch, igniting every single desire she’s denied herself for so long.

Cooper Davis, NFL’s star quarterback and most eligible bachelor, packs up and leaves his home to move across the states to the East Coast after an injury results in the embarrassing trade to another team. Bitter from the pain, he deals with his problems through drugs and alcohol—almost ruining his football career—until he meets the one woman who makes him want to feel; the same woman who refuses to give up on him no matter how many times he screws up. He has to have her, and he’s not going to stop until he makes her his. Especially, now that someone else threatens to take her away.

Motocross champion and local bad boy Luke Collins never takes no for an answer. For the past four months he’s used his charms to get what he wants, and now he’s so close to getting the girl of his dreams … if she’ll give in just once. One time is all he needs, and he’s never been known to fail, but he’s also never had to fight for a woman’s affections. Only one man will win their way into Kate’s heart, but which one will intercept the other and take what they want? Which one will she choose?
Available ebook formats: epub mobi lrf pdb html
First 20% Sample: mobi (Kindle) lrf pdb Online Reader
Price: $2.99 USD
Buy Add to Library Give as a Gift
How gifting works
Create Widget
Tags: romance coming of age sports football second chances new adult romance and mystery romance and sex romance second chance romance and alpha male romance sports
About L.P. Dover

New York Times and USA Today bestselling author L. P. Dover is a southern belle living in North Carolina with her husband and two beautiful girls. Everything’s sweeter in the South has always been her mantra and she lives by it, whether it’s with her writing or in her everyday life. Maybe that’s why she’s seriously addicted to chocolate.

Dover has written countless novels in several different genres, including a children’s book with her daughter. Her favorite to write is romantic suspense, but she’s also found a passion in romantic comedy. She loves to make people laugh which is why you’ll never see her without a smile on her face.

You have subscribed to alerts for L.P. Dover.

You have been added to L.P. Dover's favorite list.

You can also sign-up to receive email notifications whenever L.P. Dover releases a new book.